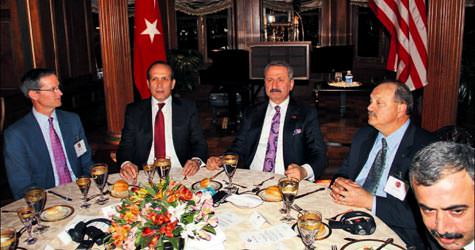 With the announcement of the new incentives system, U.S. firms Pepsi, General Electric, 3M, Kimberly-Clark and Quest Diagnostics have all decided to invest in Turkey.

After his recent trip to China, Turkey's Minister of Economy Zafer Çağlayan has now begun his schedule of meetings in the United States. Çağlayan met with a number of administrators from leading American companies during his first stop in the U.S. to New York. "American businessmen are more excited about the new initiatives system than we are, "states Çağlayan who explains that these firms which raked in a combined annual revenue of 300 billion dollars in 2011, and create employment opportunities for 785,000 people are now planning to make new investments in Turkey. "With a total 300,000 employees and 60 billion dollars in annual revenue, Pepsi Co. has now decided to increase their 800 million dollar investment in Turkey to five billion dollars. The firm plans to make Turkey their base of distribution to countries in the Middle East and North Africa," announces Çağlayan.

TURKEY TO BE A BASE

Meeting with high level administers from Kimberly-Clark, the producers of worldwide famous brands such as Huggies and Kotex, Çağlayan explained that the firm plans to redirect investments in other nations to Turkey. "This company has investments in 37 different countries and stores in 150 countries. They want to make Turkey a logistics base," states Çağlayan. Administrators from the four billion dollar brand 3M also want to establish Turkey as a main base of operations and an investment center, explains Çağlayan. "They want to make a new factory in Çorlu. These firms expressed plans to benefit from the new regional incentive system." Çağlayan also revealed that Quest Diagnostics, with seven and a half billion dollars revenue, also plans to come to Turkey and invest in the health sector.

A meeting with General Electric (GE), resulted in the request to produce wagons and locomotives in Turkey. Minister Çağlayan in turn, explained Turkey's plans to build a 10,000 kilometer long railway network and expressed how important GE's investment would be. "We went on a hunt for investments and in 2013 especially there will be an explosion of them," states Çağlayan.