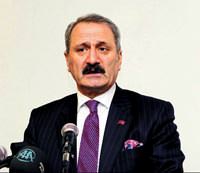 Minister of Economy Zafer Çağlayan has announced that Energy Allied International, whose CEO has roots spanning back to the Ottomans, will be making a two billion dollar investment in Turkey.

While in the United States and Mexico in order to promote Turkey's new incentive system, Economy Minister Zafer Çağlayan continues to deliver good news of future investments. Çağlayan has recently announced that Energy Allied International is preparing to make a two billion dollar investment in Turkey.


"Energy Allied International has investments spanning from Alexandria to Cairo. The Chairman and CEO Mike Nassar is part Turk. His great grandfather arrived to Egypt with Kavala Mehmet Ali Pasha. Exiled during the Nasser era, they immigrated to America. Energy Allied is one of the biggest energy firms in Houston. They have signed onto a variety of significant projects in a number of continents. They work with petrochemical LNG. They want to invest in Manisa in order to make synthetic gas using their own technology on domestic coal."

"They are planning to make a two billion dollar investment. Turkey's Coal Enterprise (TKİ) will be permitting them to enter the mine field and they will be providing for the chemical sector's main needs. They will be arriving to Ankara in May. This will rectify the current account deficit in the petrochemical sector. They want to begin investments quickly."

Çağlayan will be attending the G-20 Economic Minister Summit which begins today in Mexico. In Houston, prior to the summit, Çağlayan relayed the new incentive system to businessmen and called on them to promote Turkey themselves, asking them to send investors from America to Turkey. Minister Çağlayan also met with KBR a firm which builds pipelines in a number of countries including Russia and Alaska. According to Çağlayan, KBR administrators expressed an interest in collaborating with Turkey on refineries. Minister Çağlayan stated, "They have plans to gasify coal." Noting that the new incentive system has increased international investors' interest in Turkey, Çağlayan states, "The incentives have worked to ignite interest. In economy, emotions are different than principles. If a firms' trade reputation is harmed then the firm is harmed. For investors, the most appealing incentive with Turkey is the fact that its reliability index is high."