‘Istanbul’ to draw in Arab tourists for Ramadan 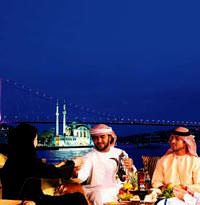 Turkey’s tourism sector is going all out in order to increase the number of Arab tourists that visit Istanbul during the Ramadan holiday. The Ministry of Tourism and Culture, Turkish Airlines, hotel and restaurant owners are drawing in Arab tourists with a series of special offers.

The tourism industry is working on preparing a very special package in order to draw in Arab tourists, Istanbul's highest potential market for visitors during the month of Ramadan, which falls between July and August.

This year, Turkey's Ministry of Tourism and Culture, Turkish Airlines and the Touristic Hoteliers and Businesses Union (TÜROB) will be attending the Arabian Travel Market Tourism Fair which begins on Monday in Dubai and is participated in by all Arab nations. Ministry of Culture and Tourism Promotion Manager Cumhur Güven Taşbaşı explains that this year they have prepared a very special 'Istanbul' package which will include flights, accommodation, shopping and cultural tour discounts for Arab tourists.

Taşbaşı states, "We are preparing a tour program for Ramadan entitled 'Istanbul'. With this package, our hotels will be offering special discounts to Arab tourists throughout the holiday season. Turkish Airlines will also be discounting flights to the Middle East. Our food and beverage facilities will be offering special discounts for the breaking of the fast meal. Meanwhile, the program will also be supported by the municipality and museums."

TÜROB Chair Timur Bayındır refers to Arab tourists as being the saviors of Istanbul tourism in the summer months and says, "The fact that Ramadan falls in the summer months, actually disrupts our tourism season. However many tourists we can draw in with package tours the better. If we are able to gain back at least half of what we've lost that would help us recover."

Bayındır explains that they have also been in contact with the municipality in order to request that shopping centers remain open later for Arab tourists who love to shop as well as for transportation services, such as buses and ferries to also offer later services. According to Bayındır, they have organized tours of mosques and shrines in the past; however Arab tourists tended to show more interest in shopping.

TÜROB Executive Board Member Müberra Eresin explains that Arab tourists love to travel during Ramadan; however tend to postpone their trips due to neighborhood pressure. Eresin says, "In the Middle East there is something called neighborhood pressure. If people go on vacation during Ramadan it makes people think that they are going away just so they do not have to fast. This of course affects tourist arrivals. However, programs that allow them to fulfill their religious tradition in Turkey, ends up convincing them to come." Eresin explains that Arab tourists used to go to Malaysia during Ramadan, but now Istanbul is able to offer so much more." The developments in Egypt coupled by the fact that Saudi Arabia has withdrawn their representation in Egypt have also been influential in redirecting Arab tourists to Turkey," says Eresin.