PM Erdoğan I will be bringing S&P up at G20 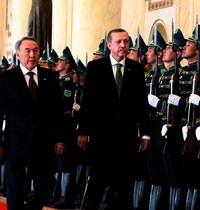 Prime Minister Erdoğan is accusing S&P for political motives being behind their decision to downgrade Turkey’s rating and states, “I am going to bring the issue to the agenda at the G20 meeting.”

I have expressed my sentiments regarding this world's credit rating institutions numerous times and I am doing so again. Now, I plan to especially bring the issue up at the upcoming G-20 meeting." Emphasizing the importance of rating institutions conducting fair evaluations, Erdoğan stated, "A country's economic situation must be justly assessed with its unemployment and exports figures. If it is done any differently then an injustice is served which is something that would seriously harm developing nations."

Speaking from the OECD Council of Ministers Meeting, Deputy Prime Minister Ali Babacan stated, "We could end our contract with 'S&P'. We have not made a decision as of yet, but we could go that way at any point in time. We have no agreement with Fitch."Babacan also commented on the debate surrounding Turkey establishing its own credit rating institution, by stating; "The legal infrastructure is ready."