Turkish weddings in demand by Arabs 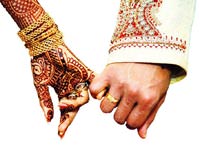 The Arabs’ love for Turkey, evident from the popularity of Turkey’s television series, has now spread to wedding planning. Turkey’s wedding planners are now seeing high demand by Arabs for Ottoman weddings.

These days Turkey seems to have been put on a pedestal by Arabs. Spanning from Turkish cinema to sports, arts to politics, the Arabs love of Turkey is currently on the rise. This adoration is also being reflected on the nation's economy. Arab tourists are practically flowing to Turkey. With regressed exports to Europe, Turkey is now looking to increase exports to the Middle East. Meanwhile, Arabs are waiting in line to become homeowners in Turkey. It is this love of Turkey by Middle Easterners that is sending the nation on a whole new journey when it comes to exports. Now it seems, Turkey will be proving a whole new sort of exports in the form of wedding planning.

Arabs, who are willing to dish out millions of dollars on wedding organizations that would place Istanbul in one of the top spots as most desirable wedding locations, are now demanding weddings of Ottoman grandeur in their own countries. SABAH speaks with a number of well-known wedding planning firms based in Istanbul.

A 46 is currently planning a wedding for İrfan Allana, the son of the world's biggest dried goods and frozen meat producers who will be getting married at the Çırağan Palace. There have been 750 people invited from New York to London and Mumbai to Abu Dhabi for the June 15th wedding. The wedding will also include a Whirling Dervish show. A 46 is also working in conjunction with an Arab organization in Abu Dhabi to plan events during the month of Ramazan.

Candan Kıramer and Betina Mahler are the owners of another wedding planning company that is currently planning a grandiose wedding in Bodrum for a Saudi family. Cremano Wedding is another wedding planning firm working in conjunction with Beyhan Bağış's Anatoli brand to organizer an Ottoman-themed wedding Dubai. Arabs now prefer to use Turkish wedding planners because of their designs and taste. In the past, the British were in highest demand for wedding organization.
Turkish firms have received wedding planning requests this year from Saudi Arabia, the Middle East and India. There will be 350 foreign weddings in Istanbul this year. With weddings costing anywhere from 150,000 dollars to two million dollars, this situation will also provide additional employment opportunities.

WEDDINGS INCREASE BY 20 PERCENT EACH YEAR

The sector contributes to 20 different fields of business in Turkey.
Every year, approximately 650,000 couples get married.
195 million dollars are spent annually on bridal gowns alone.
The number of weddings increases by 20 percent every year.
There are 350 foreign weddings held in Turkey annually.