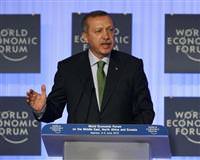 Delivering the keynote speech, Prime Minister Recep Tayyip Erdoğan highlighted Turkey's development over the past decade. Erdoğan refrained from mentioning Israel, but he did talk about Palestine, stating that they live in the largest open-air prison in the world. Erdogan was followed by Palestinian President Mahmoud Abbas.

The World Economic Forum Middle East, North Africa and Eurasia Summit, which will run until June 6th in Istanbul, is a first in the 42 year history of the organization which was formed in Geneva, Switzerland in 1971 for encompassing the widest geographical region. With 1,100 participants from 70 different countries, 50 of which are expected to participate with the highest level state representatives, the Istanbul World Economic Forum Summit opened on Tuesday with an address by Prime Minister Erdoğan.

In Istanbul to attend a Davos-level international regional summit on the Middle East, North Africa and Eurasia, Stephen Kinnock, the director of the Europe and Central Asia region for the World Economic Forum spoke before the start of the two-day summit. "The continuation of our relations with Turkey is of utmost importance for us. It would be nice to see Turkey represented at the highest level once again."

Kinnock went on to offer an open invitation to Prime Minister Recep Tayyip Erdoğan, who during the 2009 World Economic Forum in Davos, Switzerland, walked away from the panel stating "Davos is over for me." Stating that the 'One Minute' crisis in Davos needs to be put behind us, Kinnock said, "Yes, the 'One Minute' incident did take place, however now we are moving on. Turkey is very important for us and we are happy to be here again. This World Economic Meeting in Istanbul is the best symbolic indicator that we have the right dialogue with the Turkish government."

Pointing out that due to the reforms of recent years, Turkey's economy has become increasingly resilient, Kinnock stated, ''Turkey has gone through a great transformation in recent years. Ten years ago the inflation rate was incredibly high. People witnessed all of their savings vaporize in an instant.
There was an unbelievable huge imbalance in the financial system. We have seen that in the past decade Turkey's economy management has taken some very radical measures. Meanwhile, political stability has also been established. Turkey's foundation is extremely solid and its economic appearance and financial structure is well in place.''

Emphasizing that Turkey needs to be prepared for risks derived from the Euro Zone, Kinnock went on to state, ''There are two issues of concern in terms of Turkey's economic outlook. One is the fact that Turkey continues to deliver a significant amount of imports to Europe. How Turkey will be affected by a drop in demand from Europe is a significant issue. Turkey will need to show resilience. The other issue is the current account deficit and energy imports. We will be discussing these issues as well as Turkey's likely strategy in sessions held in Istanbul."

Commenting on the issue of liquidity that could surface in Europe as a result of the deepening crisis, Kinnock said, "There is a large amount of liquidity in Europe. There is a four trillion Euro fund capacity that could be tapped into should the Europe Central Bank face a liquidity issue. The real problem is the fact that people in Europe are extremely cautious. Rather than liquidity, the issue is more closely related to the fact that trust in the markets has dropped. Certain countries especially are acting extremely cautious. The steps Europe takes in this crisis will hold much significance.