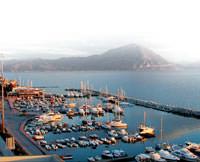 Turks are now seeking to acquire their struggling neighbors’ products and assets. Turkish firms are currently rolling up their sleeves as they await the results of the Greek election and prepare to engage in a series of privatization tenders. Meanwhile, the volume of direct investments is also on the rise.

Doğuş Group has purchased four marinas in Greece thus far, while Pak-Maya and Çukurova Group have also decided to acquire growth through purchases in the region.

Foreign Economic Relations Board (DEİK) Turkish Greek Business Council Chairman Selim Egeli states, "Firms have been awaiting results from research conducted prior to the upcoming election. It appears that the winning parties will continue with the privatization program from where it left off. A number of groups are especially interested in tourism and energy projects."
Egeli also noted that a variety of Greek firms may be transferring main operations over to Turkey due to the nation's crisis. "There are certain companies, especially in the software, food and construction sector that want to establish their headquarters in Turkey. Instead of operating from Greece, they want to come to Turkey, with its 70 million in strength market. Instead of scrambling in the German and French market, they perceive Turkey with its shared cultural heritage to be a more viable option," states Egeli.