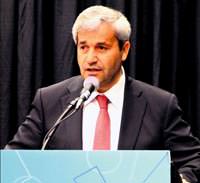 Turkey is soon to take a strategic step for nation's the pharmaceuticals sector, which suffers crises annually between firms and the Social Security Administration while also writing up a bill of approximately five billion dollars in imports. In 2011 alone, Turkey spent 4.7 billion dollars on importing pharmaceuticals.

Turkey's Minister of Science, Industry and Technology Nihat Ergün explains that when it comes to medicine the state will no longer be bargaining prices, they will now be negotiating on Research and Development and production.

Attending the 2012 BIO International Congress, Minister Ergün met with CEO's from a series of leading pharmaceutical manufacturers such as Baxter, Pfizer, Biomarin and Merck.
Explaining that Baxter has expressed intentions to make a 170 to 180 million dollar investment into a new line of pharmaceuticals, Ergün said that the company also wants to invest in pharmaceuticals geared towards the immune system in Turkey. According to Ergün, Turkey, which currently consumes 10 to 12 billion dollars worth of pharmaceuticals is now making a move to produce domestically. "We will no longer be looking to buy the cheapest medicine; we will be purchasing those produced in Turkey. We realized ten years ago that we were buying our medicine at inflated prices. Then we began to receive drugs at discounted prices. From here on out, our approach will no longer be price-based. Our intentions are to conduct Research-Development in order to ensure production can be done in Turkey."

Ergün also pointed out that Baxter provides dialysis patients in Turkey with at-home treatment and stated, "This system could become widespread. It would make things much easier for dialysis patients. The Ministry of Health also wants the system to be more accessible."