A 50 billion cubic meters’ worth bridge to Turkey 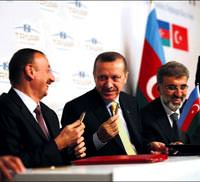 Turkey and Azerbaijan have signed onto TANAP, a new seven billion dollar project which aims to provide 50 billion cubic meters of gas to Europe via Turkey.

Turkey has taken yet another step towards establishing the country as an energy bridge for European nations. Signing on to the new Trans Anatolian Pipeline (TANAP) project, Turkey will now be providing access to 50 billion cubic meters of natural gas to be transported to Europe's Bulgarian and/or Greek borders.

TANAP, which consists of the partnership of Azerbaijan's state petroleum firm SOCAR and Turkey's state-run BOTAŞ and TPAO, will be brought to life through a seven billion dollar investment. The initial phase of the TANAP project will be completed within the year 2018.


Speaking at the signing ceremony also attended by Azerbaijani President İlham Aliyev, Prime Minister Recep Tayyip Erdoğan stated that with the realization of the TANAP project, Turkey and Azerbaijan will have achieved a noteworthy contribution to the EU's resource diversification. Emphasizing that through this project, both countries will also have taken on a significant role in the security of supply for Europe, Prime Minister Erdoğan stated, "It is being expressed that in the future the amount of supply could reach up to 50 billion cubic meters. Turkey will initially be able to obtain six billion cubic meters, which will later become ten billion cubic meters and as for the upcoming years, our brother Aliyev says we will be able to obtain however much we need."

OTHER FIELDS TO BE ADDED

Prime Minister Erdoğan explained that the TANAP Project will begin operations with Shah Deniz Phase Two gas, however in the future this pipeline will also be able to transport gas obtained from other areas in Azerbaijan.

Also speaking at the ceremony, Azerbaijan President İlham Aliyev noted that Turkey and Azerbaijan's relationship is unique and that there is none other like it in the world, and stated, "This is solely a Turkish-Azerbaijani project. We will be conducting this project through our own strength, funds and technical capabilities. As a result of this project, w will be transporting even more gas to Turkey."
Pointing out that Azerbaijan has a significant amount of gas resources, Aliyev went on to state, "This project, which we are beginning today, will benefit us for maybe the next ten or 100 years. At the same time, this project will also provide the opportunity for Azerbaijan to expand into new markets," states Erdoğan.

In regards to Azeri gas being transported in transit through Turkey, Prime Minister Erdoğan stated, "We are witnessing an extremely significant event, not only in terms of developing Turkey-Azerbaijan energy collaboration and in ensuring security of supply for our nation, but also for its contributing to supplying energy to Europe. All of these projects, which establish the East-West energy corridor, are strategic steps in terms of developing security and peace in the region as well as providing economic progress. This project means a whole lot more than solely being a commercial investment."