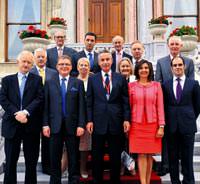 The reason behind the bank's decision to take the first step towards establishing Istanbul as a financial center is because it has placed Turkey amongst its top 20 markets in terms of personal banking investments.

"We don't usually hold meetings in different countries. The reason that the entire executive board is now here is due to the importance we place on Turkey," states Antonio Simoes, who went on to say: "Turkey will be taking the forefront of developing nations in conjunction with the decline in BRIC. Turkey will become one of the most investable markets out of the 85 nations HSBC operates in. We have an extremely fast growth target for Turkey in both retail and commercial banking as well as in export financing. Our growth calculations for Turkey are at two percent, however while the world stands at a halt, Turkey is still experiencing growth," states Simoes.

'WE HAVE A GOOD PLAN'

Sandy Flockhart reveals that HSBC has a "good plan" for growth in Turkey. "I feel that in order to become a top league bank in Turkey, there are extremely large steps to take. We are aiming to be between the top league and the middle. This is an organic growth. We base our investments in countries on five different criteria. Turkey is one of those countries that fulfills that criteria."

Turkey's share of foreign investments is on the rise

Sandy Flockhart also expressed that HSBC expects Turkey to become one of the 12 biggest nations by the year 2026. "We act as a direct middleman for our foreign customers that want to come to Turkey. We also provide funds for those who have investments here that are intending to grow. Therefore, we are able to see the increase. I think Turkey is now a more visible country. Even though foreign investments are on a decline in the world, Turkey continues to draw in investments. Throughout the world investments are on the decline. However, compared to the past, we can honestly say Turkey's share has increased."