China to wear a Turkish brand 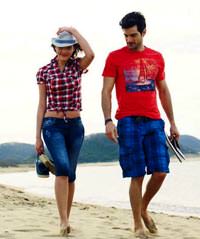 Colin's is planning to enter the Chinese market next year. According to the CEO of Colin's Yavuz Eroğlu, plans are to open 55 stores in the first year alone.

With 600 stores both nationally and abroad, the youthful clothes line brand Colin's will soon be entering the Chinese market with intentions to open 55 stores within one year's time.

Colin's CEO Yavuz Eroğlu states, "This is a market we have been looking into for a long time now. We will be making an approximate ten million dollars investment into these stores." Explaining their plans to enter South Africa via the internet and as a multi brand, Eroğlu mentioned that they have been looking at the Johannesburg market. On the one hand, they are also looking into the Europe market, says Eroğlu, explaining that they are negotiating to take on a children's and women's clothing brand. "We are beginning to open stores in Germany. Although Europe is in crisis right now, it has become a market we can do business in. Because Europe is unable to create a new brand, they are extremely willing to give us store space, especially in shopping centers. We will use these advantages."

Emphasizing that Colin's plans to have 1,200 stores in 50 different countries, to bring in two billion in revenue and to employ ten thousand by the year 2015, Eroğlu said that they will be opening 105 stores this year alone. Sixty percent of the items sold in Turkey are manufactured in Turkey while 25 percent of the products produced in total are manufactured in Turkey, explains Eroğlu, who goes on to state that with the incentive program they have begun looking into setting up production facilities in the Eastern and Southeastern regions while also intend to increase capacity of their Aksaray factory.

Mentioning that during the internal uprising in Libya, Colin's was forced to shut down their stores for six months, while in Syria their stores were looted, Eroğlu stated that despite being in crisis, their business in Greece is doing well due to the fact that they sell quality products at reasonable prices.