We will not be shutting off Syria’s electricity supply 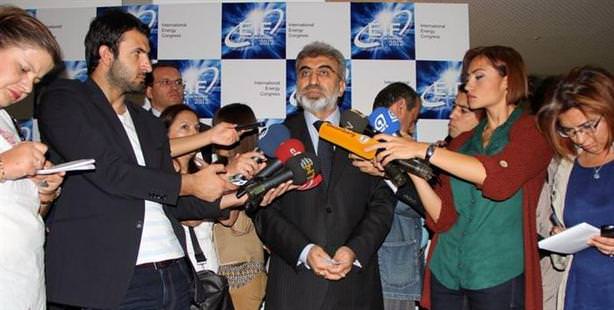 Minister of Energy Taner Yıldız said on Thursday that Turkey is not considering cutting off its supply of electricity to Syria¸ “Our issue is not with the innocent public.”

Turkey's Minister of Energy and Natural Resources Taner Yıldız says that it would be wrong to think that energy prices will go up as a result of the tension between Turkey and Syria.

''We do not have such expectations. We also know that Syria is not a large oil and natural gas producer and therefore Turkey's consumption is disproportionate to the energy figures from Syria."
Minister Yıldız was speaking to members of the press while attending the International Energy Conference and Fair.

When one journalist asked, "Will the tension between Turkey and Syria result in a hike in energy prices?" Minister Yıldız responded by saying it was wrong to make such assumptions and they are not expecting anything like that to happen and said that they want everyone to be relieved on that point.

"Turkey will continue to supply Syria with electricity as well as water, which is supplied to the country through Iraqi territory," stated Yıldız.

Emphasizing once again that electricity is currently being distributed to Syria, Minister Yıldız stated, "We are not concerned by the Syrian public, what we are concerned about is the wrongdoing of the Syrian regime.

We are talking about a situation that has evolved into a humanitarian tragedy in which over 30,000 people have been killed in an environment in which the death toll continues to rise daily. No matter what country is responsible, there is absolutely no excuse. This is an issue dealing with putting an end to this tragedy. Therefore, we are not in any way talking about issuing sanctions against the innocent Syrian public."

When one journalist asked whether Yıldız thinks there is a risk the tension may turn into all out war, the Minister replied, "I don't think it will get to that point."

When asked a question regarding Turkey-Iraq relations, Yıldız stated that Iraq's integrity in every manner is important and said that the decisions made there directly affect Turkey.

"When it comes to the nation's petroleum products needs, we have expressed that we will not be able to remain indifferent. Therefore, I can comfortably say that the energy sector will not be getting involved in the time to time escalation of tension between the nations due to extraneous reasons."