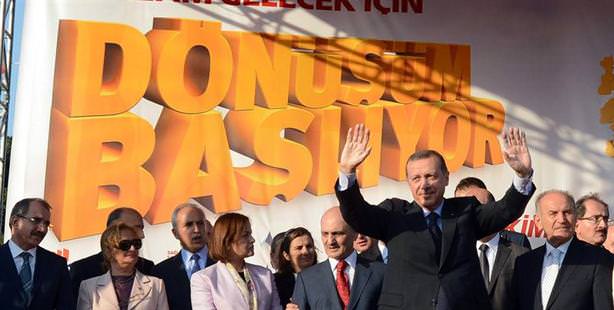 Turkey’s urban renewal project, which Prime Minister Erdoğan has said they will do whether it costs him his position in power, started off with the demolition of 3,169 buildings in 35 different provinces, officially kicking off yesterday. During the demolition ceremony, Erdoğan said, “We will not allow our citizens to live in an unsound building.”

Yesterday, Prime MInister Recep Tayyip Erdoğan kicked off Istanbul's grand urban renewal project which will involve seven million buildings throughout the country, and is anticipated to bring in 400 billion dollars. The demolition ceremony held in Esenler, coincided with the simultaneous demolition of 3,169 buildings in 75 locations in 35 provinces.

Ten lodges in Sarıgazi belonging to the Ministry of National Defense were demolished with explosives, which marks the first time a professional dynamite demolition method has been implemented in Turkey.

Speaking at the demolition ceremony, Prime Minister Erdoğan stated, "We will be building new living spaces with an understanding of placing importance on green areas. We will be switching the unsound structures at present into new buildings that are safe. This will be a major part of the urban renewal. This is not income-based; we want to realize a people-based project. We will be creating health centers, parks and all new living areas." Explaining that their goal will be to build these sorts of residential areas throughout the country, Erdoğan stated, "The 780,000 kilometer square land that makes up this country is entirely in our care. Whatever we build in the West, we will do the same in the East and what we build in the North we will build in the south."We are going to uproot the entire 780,000 cubic meters.

"First and foremost we must have the property owners consent. Our citizens will be doing this renewal on their own," stated Erdoğan. "Please have the buildings that have completed their economic lifespan checked out. If you don't, then our state institutions will. These building will absolutely be brought down. We will not continue to allow our citizens to live in unhealthy buildings. We will be ensuring that all buildings have been checked out."

Prime Minister Erdoğan says that this urban renewal project is the single-most largest project to take place in Turkey. After delivering his speech, Erdoğan handed over the ten million dollar check to Mayor Tevfik Göksu to assist in citizens' rent for those living in the nearly 5,000 homes demolished in Esenler."

This is a translation of an article originally written by Mesut Er and Zeynel Yaman.