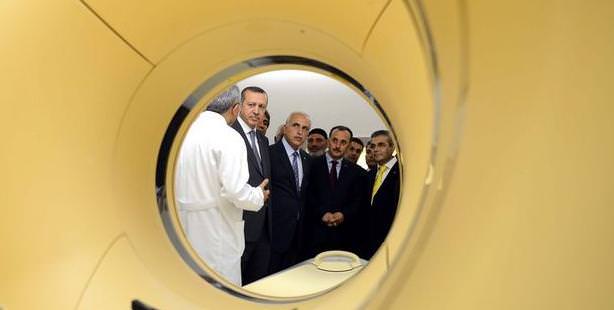 Prime Minister Erdoğan’s nine-year-long vision in health reform is slowly coming to life. As part of this mega transformation to the nation’s health system, Turkey will soon have urban hospitals under a new model that will allow for varying medical services to be provided within the same hospital complex. Prime Minister Erdoğan also says that he shared his vision with U.S. President Obama prior to the U.S. health reforms.

Turkey's current heath reforms are a product of a nine-year-long vision by Prime Minister Recep Tayyip Erdoğan. The reform will include a new model of urban hospital complexes, which will be set up in 25 different provinces geared towards providing various medical services within the same vicinity. "We will be bringing the bed capacity up to 43.2 thousand," said Prime Minister Erdoğan, speaking at the opening of the Medipol Mega Hospital Complex in Bağcılar, Istanbul. Erdoğan announced plans to build three such complexes in Istanbul on areas of land between 750,000 and 1.5 million cubic meters. One is planned to be constructed near the Olympic Stadium, with a second complex planned to be located near the Turkish Armed Forces Airport in Samandıra.

The Medipol Mega Hospital Complex was built with a 150 million dollar investment on a 100,000 cubic meters enclosed area and is Turkey's foundation-university hospital. The complex includes oncology, cardio vascular surgery and mouth and dental specialized hospitals as well as four other general hospitals. There are a total 25 surgery departments and 126 beds in intensive care, with a 470 bed-capacity. "In 2002, before we came into power, there were only 6,839 beds, today that number has reached 39,515," stated Erdoğan, who went on to say, "A state that is unable to provide the highest quality education to their citizens is not fulfilling their rightful duty."