Kazakh-Turkish trade on the rise 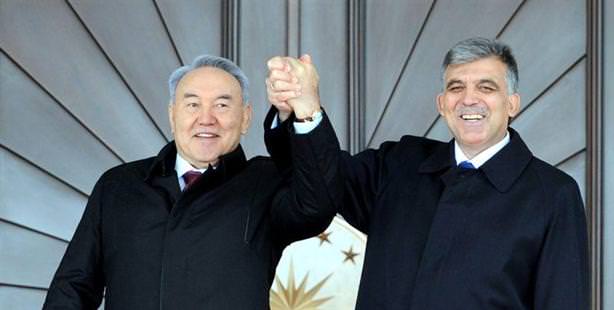 Turkey and Kazakhstan have devised a three-year action plan that will bring the joint trade volume to ten billion dollars.

A new page is turning in economic relations between Turkey and Kazakhstan. As part of the new Synergies Economic Program, a three-year plan has been devised to bring the trade volume between the two nations up to ten billion dollars.

In addition to the start of a number of new projects with commercial, economic, education and cultural investments, this program will also involve the building of Kazakh-Turk industrial zones. Completion of the Iran-Turkmenistan-Kazakhstan railway will be expedited and Kazakh's energy shores will be directly connected to Turkey. Today in Istanbul the two nations also signed a 1.5 billion dollar agreement primarily involving the energy sector.

President Abdullah Gül hosted Kazakh President Nursultan Nazarbayev yesterday with an official ceremony. During Nazarbayev's stay, which includes attending a dinner in honor of Prime Minister Erdogan, the two presidents will also be overseeing the signing of an action plan which will be implemented by 2015 and will include increasing trade relations, mutual investments and trade volume. The plan includes establishing collaborations in the metallurgy, chemicals, machinery, food, industrial and construction materials sectors. The Bakü-Tiflis-Kars railway line will cross over the Caspian Sea, providing access to Kazakhstan, which is one of the upcoming foremost priorities. In addition, the plan involves technical collaborations including watering and microwatering systems. Also, special economic zones will be designated in a number of locations in Kazakhstan.

After intense meeting traffic in Ankara, today Nazarbayev was in Istanbul to attend the Turkish Business Forum and to witness the signing of a 1.5 billion dollar agreement. The Kazakh leader also met with a number of Turkey's leading figures in the business work including Çalık Holding Executive Board Chairman Ahmet Çalık, Güler Sabancı and Ali Kibar.

Nazarbayev's trip to Turkey holds much significance in terms of economic relations between the two countries. This was the first meeting of the High Level Strategic Cooperation Council founded during Erdoğan's trip to Astana. Following the meeting, Economy Minister Zafer Çağlayan and Kazakhstan Deputy Prime Minister and Minister of Industry and New Technologies Aset Isekeshev signed the three-year action plan which will conclude in 2015. With this program, the two nations will be joining forces in a number of areas spanning from industry to transportation, science to innovation and banking to even the energy sector. Also part of the agreement will be the development of industrial zones and technology parks as well as a number of tourism investments.