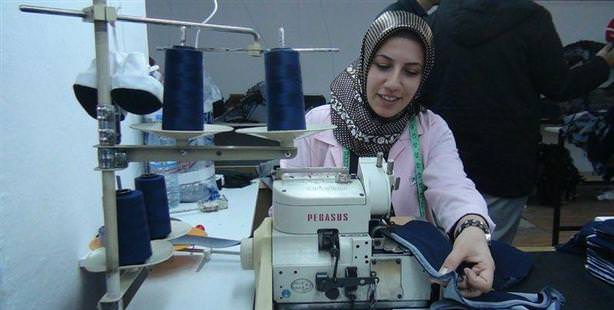 The state-imposed importing tax on textiles has resulted in a revitalization of domestic production. Textile manufacturers are overloaded with orders, while new workshops are being set up. Sales for confectionary machines have exploded, with orders for the machinery given a month and a half in advance. In a single year alone, 108,000 jobs were created in Turkey’s textile industry.

The new tax scheme implemented by the Economy Ministry in September of last year, which included additional taxes to the imports of textiles and ready-to-wear clothing, has revived Turkey's textile industry exponential over the past year. In one year alone, the previous four billion dollars in exports has regressed to 2.5 billion dollars. With the increased domestic production, new workshops have been established, resulting in the creation of 108,000 new jobs this past year. Confectionary machines are also experience a renaissance in demand, with this year marking the first time there has been an increase in machinery sales since 2007.

Astaş Juki Member of the Board of Directors Tuncay Aşçı explains that their machinery orders have increased by 30 percent since last year."This year, we will be selling approximately 30,000 machines. In 2008 and 2009, this figure had dropped down to the ten thousands. There is a new increase in demand; in fact we are only able to deliver the machines a month and a half after orders are made. Most recently, we have especially been receiving orders for technologically advance machines."

Machine orders are also increasingly on the rise in Anatolian provinces which are experiencing a boom in investments as a result of the state-released incentives package. Explaining that textile manufacturers from Istanbul have begun investing in Anatolia, which has resulted in an increase in new machinery orders, Aşçı states, "There is a labour problem in Istanbul. Firms are unable to find workers for textiles. The objective is to relocate the textile business to Anatolia and we have already begun to see examples of this transpiring." The increase in production has also worked to benefit the nation's employment. Stating that over the past year, nearly 108,000 jobs have been created in the industry, Istanbul Textile Confection Importers Union (İTKİB) President İsmail Gülle also shares that a number of new factory workshops are opening up. Underlining that Turkey has begun to become a model country in manufacturing, Gülle says, "This is best witnessed from our machinery orders. There is also an increase in capacity in Anatolia. New manufacturers are coming on board," states Gülle.


A number of purchasing groups which are facing difficulties finding end-producers and establishing prices are now looking to purchase manufacturing companies as a means to a solution. With intentions to produce for themselves alone, they will not only be able to sell chief materials abroad but will also be able to create and sell collections. A number of producers that have prepared and sold collections to Europe in recent years have seen significant success. Sector representatives say purchasing groups are increasingly in negotiations to purchase manufacturing firms.

TAILORS ON THE BLACK MARKET

No longer importing, Turkish firms are now directing efforts towards domestic production which has also resulted in the high demand for tailors, which are using this factor to renegotiate their price. With orders increasing by 30 percent over the year, tailors have fast become an indispensible part of production, which has raised their prices by 20 percent.

Knitwear producers, which were some of the forerunners requesting additional taxes be implemented on imports, are now experiencing a golden age. Production from Far East nations, predominantly Bangladesh and Vietnam, had weakened the competitive power of Turkey's knitwear manufacturers in recent years, however ever since the new tax scheme was enforced the sector has embarked on new investments.

According to Turkey's Knitwear Industrialists' Association (TRISAD) Vice-President Mustafa Balkuv, production capacity has increased by 30 percent. "There has also been a boom in the interior market at the 30 percentile level. This year, our imports will reach near two billion dollars. Our production is on the rise," states Balkuv, pointing out that the biggest problem faced in knitwear at present is in finding employees. "We can't seem to find machinists or computer professionals. We lost a lot of workers when the sector weakened. This new revival in knitwear production, also aims to solve the employment issue."