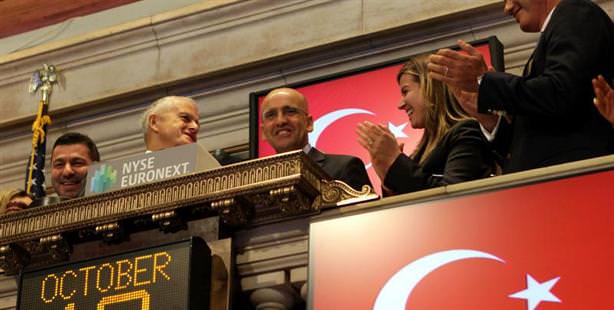 Finance Minister Şimşek, who was in New York in order to attend a conference held by the Foreign Relations Board (DEİK) and the Turkish-American Business Council (TAİK), had a chance to visit Wall Street, where the minister sounded the opening gong at the New York Stock Exchange.

Responding to questions from Turkish and foreign reporters, Minister Şimşek stated, "We are here in New York for a Foreign Economic Relations Board conference. However, while here, we also attended an opening of the New York Stock Exchange. We will be holding a number of meetings and our intentions are to share the developments in Turkey in order to draw in additional investment," stated Şimşek emphasizing that their intentions are to increase mutual investments and trade between the U.S. and Turkey.

When asked a question by a foreign reporter on the situation in Syria and how it has affected Turkey's budget and security, Minister Şimşek responded by stating, "The situation has not significantly affected our budget yet. We are hosting over 100,000 Syrian refugees. Syria is facing a great tragedy right now. Nothing is directly negatively affecting our economy, everything is under control. There are more indirect effects. However, we need to further draw the attention of the international community to Syria and the United Nations needs to take on a more active role," stated Şimşek.