'Our door is open for Turkish businessmen' 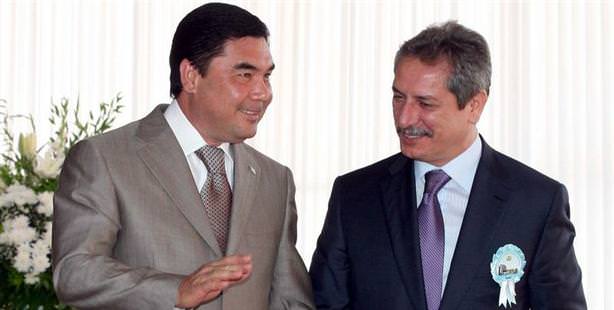 President of Turkmenistan Gurbanguly Berdimuhamedov recently hosted Çalık Holding Chairman Ahmet Çalık at the Oguzhan Palace to discuss projects in the works and potentials for the future.

Welcomed to the Oguzhan Palace by Turkmenistan President Berdimuhamedov, Chairman of Çalık Holding Ahmet Çalık offered his best wishes for Turkmen Independence Day and Eid al-Adha. Expressing how extremely proud he is to be able to collaborate with Turkmenistan; Çalık stated that he is happy to be doing business in this country. Berdimuhamedov in turn noted that they have embarked upon realizing a comprehensive program geared towards Turkmenistan's development and said that their doors are always open to Turkish businessmen.

During the meeting, Berdimuhamedov and Çalık discussed possible collaborations between Turkmenistan and Çalık Holding, both emphasizing the significant potential for collaboration. Having already signed on to a number of projects in the nation, primarily in energy but also including construction, textiles and industry, Çalık Holding is currently establishing a dental hospital, a serum factory and emergency care centers in addition to realizing the single-most significant electricity energy project in the country's history.