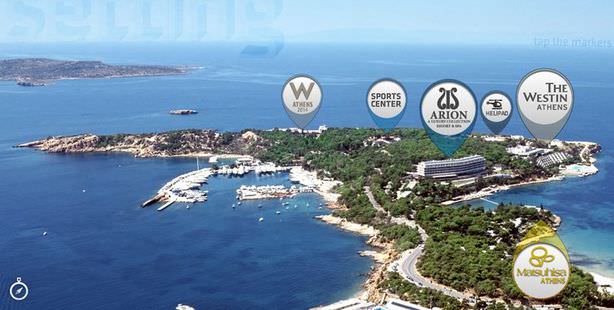 The Doğuş and Koç conglomerates are amongst the bidders for the 550 million euro Astir Palace resort, located on Athens’ Mikro Kavouri peninsula.

In line with the reform process embarked upon to recover the nation from a stifling economic crisis, Greece continues to put property and immoveables up for sale as part of its asset disposal program which was started in 2011.

There is international-league interest in the grandiose Astir Palace, which is located on the Mikro Kavouri peninsula in the popular tourist district of Vouliagmeni.

According to an announcement by the state fund in charge of privatizations, the Greek Government Capital Valuation Institution (TAİDEP), both Koç Group and the Greek Lamda Holding, whose partners include Doğuş Group, are amongst the bidders for the Astir Palace resort which contains three separate hotel buildings. Also amongst the 14 bidders for Astir Palace are China's Fosun, TEMES, Dolphin Capital Investors, Greek shipping line owners Prokopiou as well as firms from the U.S. and the EU.

Valued at nearly 550 million euros, the Astor Palace resort is situated on a 193-decare plot of land on the Mikro Kavouri peninsula. The complex includes three hotels which contain 285 rooms and 58 bungalows. The Astir Palace also operates the Vouliagmeni Marina. The winning bidder of the tender will be announced in the fall.