A journey to increase exports 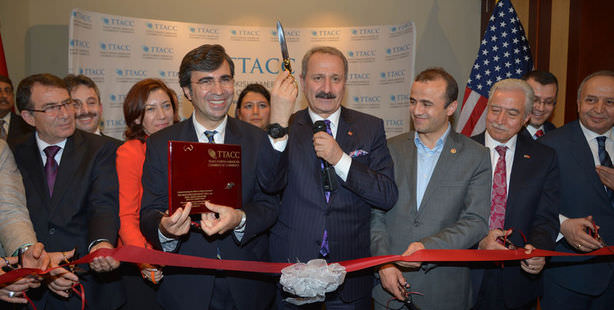 Addressing an audience at the Turkish-American Business forum held in Texas, Economy Minister Zafer Çağlayan expressed that there is an imbalance in trade with the U.S. “We sell one-fold and buy three-fold. Our relationship is reminiscent of unrequited love.”

Addressing the forum, Zafer Çağlayan drew attention to the imbalance in trade between the U.S. and Turkey. Referring to the relationship as being reminiscent of unrequited love, Çağlayan said, "There is love and affection between us, however it is as if it is platonic."

Explaining that last year, Turkey conducted 5.6 billion dollars worth of exports to the U.S. yet imports were at 14.1 billion dollars, Çağlayan told the audience, "During that same period, our exports to Texas increased by 32 percent to reach 677 million dollars. In exchange, we received 2.6 billion dollars of exports from Texas. We sell one-fold and buy three-fold. This sort of trade is not right. We absolutely need to establish a balanced structure."

Also commenting on growth figures, Çağlayan said, "I am an industrialist, I know when it is time to press on the gas. Despite certain establishments putting on the heavy brakes, our economy achieved 2.2 percent growth. This, however, is not enough for me."

HOPE FOR THE TRANSATLANTIC IN MAY

Çağlayan also remarked that Turkey has been left on the wayside in deliberations on the Free Trade Agreement between the EU and the U.S. and stated, "Prime Minister Recep Tayyip Erdoğan and Obama will be meeting in the United States in May. At that time, there will be an announcement released related to the start of free trade."

BORUSAN TO SET UP A 150 MILLION DOLLARY FACTORY IN TEXAS

The foundation has been laid for a 150 million dollar pipe manufacturing facility to be set up by Borusan Mannesmann in Houston. Speaking at the ground-laying ceremony Borusan Holding Executive Board Chairman Ahmet Kocabıyık announced that they have officially become the first Turkish company to invest in the steel-iron sector in the U.S. "We will be manufacturing equipment to be used for petroleum and shale gas at this factory. When the facility, which will be built on a 500-decare plot of land, is completed, our annually production capacity will reach 300,000 tons," stated Kocabıyık.