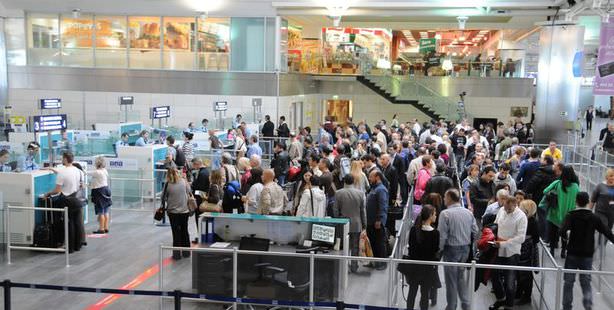 As Istanbul is fast transitioning to becoming a regional base in aviation, Atatürk Airport is now playing at the top of the global league. With the inclusion of 529,000 available seats, Istanbul’s airport has become the fastest growing airport in Europe and is third in the world.

While the global aviation market is honing in on the successive orders of 100 planes each by Turkish Airlines and Pegasus Airlines, Istanbul is now playing in the league of champions for the world's fastest growing airports.

According to a report released by one of the world's leading aviation data specialists OAG FACTS (Frequency and Capacity Trend Statistics), the Istanbul Atatürk Airport, which transported 44.9 million passengers last year, has increased its annual volume growth by adding 529,000 available seats since this past April. As a result of the increased capacity of over half a million available seats, the Istanbul Atatürk Airport is now the world's third fastest growing airport and number one in Europe.

Southeast and Eastern Turkey will also be lifting off in 2013

Transportation, Maritime Affairs and Communications Minister Binali Yıldırım recently announced that airports in Bingöl, Şırnak and Hakkari, which are currently being constructed, will go into operation this year and stated, "For our East and Southeast Anatolian regions, 2013 will be the year of aviation."
Minister Yıldırım went on to express that a number of inactive airports in Eastern and Southeastern Anatolia have been modernized and renovated and opened up to public service.

Competition abounds in the Urfa skies

According to data released by the State Airports Administration (DHMİ), a total 27 million passengers were flown in the past three months. The number of planes that took off and landed on domestic lines was 51,309 and 33,237 for international flights. In March, the Istanbul Atatürk Airport hosted 4,115,080 passengers.

The tourism industry is pleased by ongoing solution process

With the solution process in tow, the nation's Eastern provinces, which have been unable to claim the potential desired due to the years of ongoing terrorism, now want to have a presence in the field. The Association of Turkish Travel Agencies (TÜRSAB) Van District Executive Council Chairman Abdullah Tunçdemir says that due to the fear of terrorist attacks, people were apprehensive about travelling to the region. "People who were afraid to come to the region, due to the events that have transpired here in the past will no longer have to be concerned for their safety," said Tunçdemir.