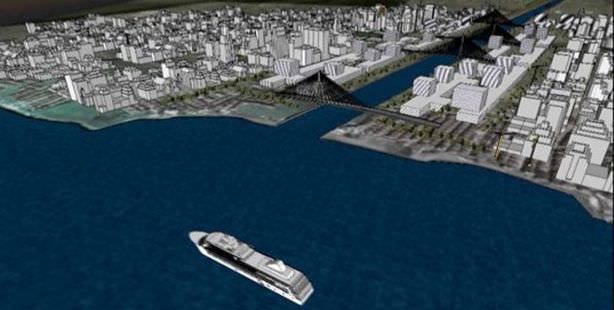 Turkey will forge ahead with plans for a 45-km (30 mile) ship canal linking the Black Sea to the Sea of Marmara to try to ease congestion in the Bosphorus Strait, one of the world's busiest waterways, the government said on Friday, announcing that the initial feasibility planning for Canal Istanbul has been completed and the project will be conducted along the Küçükçekmece-Başakşehir-Arnavutköy line.

Canal Istanbul, the new 'crazy' project that will turn the European side of Istanbul into part of a large island, running parallel and to the north-west of the Bosphorus, will be built along a newly designated route spanning from Küçükçekmece, Başakşehir and Arnavutköy. The initial feasibility studies have been completed and next week all related municipalities and establishments will be submitting their next 50 to100-year plans regarding the infrastructure and superstructure of the canal axis to the Ministry of Environment and Urban Planning.

THE ROUTE HAS CHANGED

Canal Istanbul will now be built along the Küçükçekmece-Başakşehir-Arnavutköy
route and the placement of the new settlement and reserved areas has been clarified accordingly. A major factor behind the Ministry's decision to reroute the project is the fact that 80 percent of the property surrounding the canal axis belongs to the treasury. Situating the project in this region means costs, including expropriation, will be kept to a minimum. The previously designated regions for the project of Silivri, Ortaköy, İnceğiz, Gökçeli, Çanakça and Dağyenice which would connect to Karacaköy, the Evcik Barrage and then the Black Sea consisted primarily of property necessitating expropriation, which played an influential role in the altering of the route.

According to information obtained by SABAH, on March 4th, the Ministry of Environment and Urban Planning sent a letter to the State Hydraulic Works (DSİ), Turkey's Housing and Development Administration (TOKİ), Istanbul Metropolitan Municipality as well as the Küçükçekmece, Arnavutköy and Başakşehir Municipalities requesting they relay all information they have on the locations designated as Reserve Areas including, all studies and projects, investment decisions and future plans and programs. While efforts for a third airport project have been ongoing for a year-and-a-half now, the stretch of 44,442 decares of land starting from Küçükçekmece and passing through Başakşehir has been designated as 'Reserve Area 1'.

'Reserve Area 2' will consist of a 280,029 decare area of land in the Arnavutköy district. The urban renewal areas in the natural-disaster risk areas of Zeytinburnu, Bakırköy, K.Çekmece, Bağcılar, Esenler, Güngören and G.O.Paşa will be moved to the new urban areas to be established in the Arnavutköy and Kemerburgaz district reserves.

All related municipalities and institutions will be sending their 50 to 100 year plans in regards to the distribution lines, waste water collectors and treatment facilities that will be built along the canal axis which will begin from Küçükçekmece Lake and will continue along the Sazlıdere Barrage axis to flow into the Black Sea to the Environment and Urban Planning Ministry next week.

FORESTS WILL NOT BE ON THE ROUTE

According to the plans, the project will connect the Black Sea and the Marmara Sea by a canal built through the Küçükçekmece- Başakşehir- Arnavutköy districts. This project will involve the inclusion of the contaminated and polluted Küçükçekmece and the deactivation of the Sazlıdere Barrage. Yet another great advantage to this location is the fact there are no forest plots along the route.

The most significant expropriation efforts for the 25-meter deep and 200-meter wide Canal Istanbul Project will take place in the Altıntepe, Güvercintepe and Şahintepe neighborhoods in the Başakşehir district. These three neighborhoods, which currently consist of unlicensed and illegally built homes, will become the main front of the canal.

Deputy Prime Minister Ali Babacan announced that the Higher Planning Committee decided to go ahead with the project last week, during a talk at a panel on "Economic Security" held by the Institute of Strategic Thinking in the capital.

"When Canal Istanbul is constructed certain roads will need to be rerouted and bridges will need to be built. Therefore, the Higher Planning Committee finalized their decision this week in order for the preliminary road and bridge work to start in order to allow us to begin working on realizing Canal Istanbul. We believe that this is a very realistic project that will be talked about by the world," Babacan told reporters in Ankara.