Customs for us, union for them 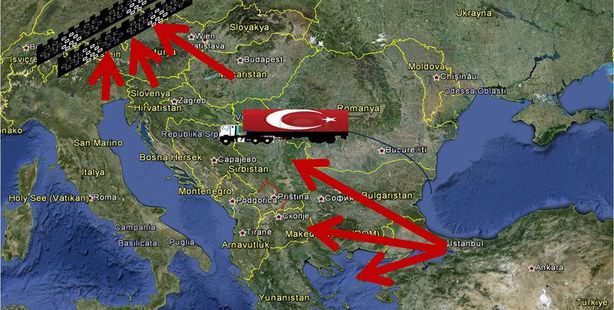 The EU continues to violate our most natural rights granted via the Customs Union. While Turkish lorries are kept waiting in train lines for being “dangerous to the environment” Austria welcomes in dilapidated trucks from Bulgaria and the Czech Republic.

The double standard implemented on Turkey within Europe's Customs Union has finally pushed transporters over the edge. Utilizing its given right to a nonquota status as granted by the Customs Union, Turkey has applied to cross through the transit nation of Austria 120,000 times annually. Austria, on the other hand, has only granted 15,000 of these such requests claiming the lorries 'pollute the environment.' When Austria refrained from suggesting other routes, Turkish lorries remained stranded at the gates of entry into Vienna.

International Transporters Association Executive Board chairman Fatih Şener explains, "Due to the waiting time, it takes Turkish vehicles ten days to get to Germany, whereas it should only take five. In addition, our products lose the opportunity of finding space on shelves in Europe Şener went on to state, "Turkish lorries which are Euro 5 outfitted according to transporting standards are loaded onto trains under the premise that it is more "environmentalist", however trucks that are practically scrap from EU countries such as Poland, the Czech Republic and Bulgaria are permitted to use the transit highways."

Reminding of when in December the Hungarian train firm Szeged shut down their line, leaving 25,000 lorries in the lurch, Şener said, "We are forced to wait in lines for over four days. This is a threat to our exports. In the lines today there were only lorries with Turkish license plates."

Commenting that Austria is reminiscent of a second great Wall of China for Turkish truckers, Fatih Şener stated that this stance goes against all international agreements. "According to the World Trade Organization and Customs Union laws, nations cannot arbitrarily use the advantage of their geographical positions to create unfair competition. To force the Ro-La system of using trains for lorry transportation, is a limitation."