PM Erdoğan: The interest lobby will not reach their objective 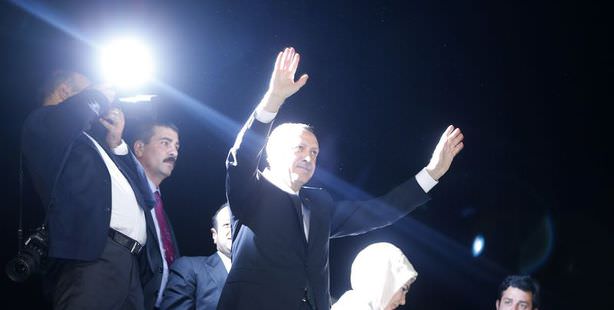 The speculative attack on the markets came to a halt following Prime Minister Erdoğan’s statement directed at the interest-rates lobby, “We will not let you consume the great efforts of our nation.” The dollar has since dropped and the stock exchange is back on a rising trend.

In an address to tens of thousands of supporters that came out to greet Recep Tayyip Erdoğan on his return from a tour of North Africa, the Prime Minister stated, "The interest-rates lobby is threatening Turkey with speculation in the markets. We will not let you consume the great efforts of our nation." Ever since the Prime Minister released this momentous statement, the markets, which have been fluctuating for days, suddenly changed course. The stock exchange went up, the dollar went down and the fluctuation in the interest rate ceased.

A RISE IN THE STOCK EXCHANGE

Borsa Istanbul (BIST) started the day yesterday on a rising trend. In the first session the BIST closed at 1.4 percent up at 76,974 points. In the afternoon, after Erdoğan spoke at the "Joint Future for Turkey and the EU" conference coupled by the figures that came in from the U.S., the second session in the BIST brought on an even further rise. At yesterday's closing, the BIST rose by 3.2 percent to 78,332 points.

The rise in foreign exchange has also come to a halt. For days, the exchange rate for the dollar ceased to drop under 1.90 TL, however yesterday the rate decreased to 1.8779 TL. Bond interest rates, which soared to seven percent during the Gezi Park protests, dropped within the day yesterday to 6.20 percent. The depreciation of the Turkish Lira has halted. The currency basket has dropped to under 2.19. The Turkish Privatization Administration announced a sale of 300 million dollars worth of foreign currency yesterday. The announcement from the association emphasized the sales were not at all connected to the protests.

The recovery in the markets yesterday was reminiscent of 2012. During that time, the interest-rates lobby managed to bring the exchange rate up to 1.91 lira through conducting speculative attacks on foreign exchange and interest rates. After the Prime Minister's announcement on January 10th that they would be taking "harsh and angled measures", the dollar dropped to 1.79 lira.

PRIME MINISTER: THE INTEREST-RATE LOBBY WILL NOT REACH THEIR OBJECTIVE

During the EU Ministers conference yesterday, Prime Minister Recep Tayyip Erdoğan stated, "The interest lobby should not get their hopes up, no offense to them as well but they will not reach their objective. Whatever the public demands is what will be."

Prime Minister Erdoğan also called on the foreign press to not address the developments in Turkey based on an ideological approach and criticized the advertisement placed by Gezi Park protesters that was published in The New York Times. "I would like to remind that it was also them who placed the order to release the advertisement (What's Happening in Turkey). We are well aware of the sources, those who cannot stomach Turkey's empowerment, are whom paid out to the international media to publish this add. This was a step taken by those who are uncomfortable with Turkey's empowerment, and reaping strength. This was a move directed towards our government and made by the interest-rates lobby in Turkey," said Erdoğan.

Prime Minister Erdoğan also mentioned the interest-rates lobby in an address delivered upon his return from a tour of Africa, where he was greeted by tens of thousands of supporters at the airport. Erdoğan stated, "The interest-rates lobby is threatening Turkey with speculation in the markets. We will not let you consume the great efforts of our nation."