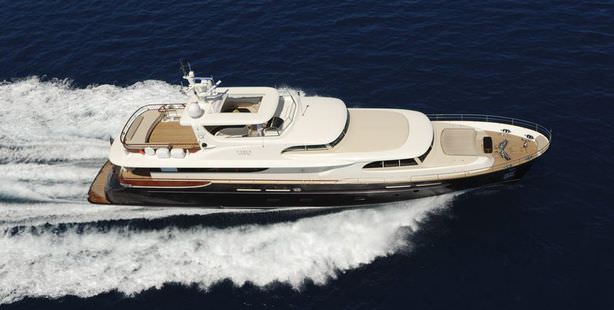 The Istanbul Boat Show opens its doors today for a two-day fair that has drawn hundreds of businessmen from Asia to Africa to take part in the event which will have sailing palaces up for sale to a tune of over a billion dollars.

Organized by NTSR Fairs, the International Istanbul Boat Show, which contributes over a billion dollars in trade volume, opens its doors today. Once again, as was the case last year, Arab businessmen are set to be the fair's most important customers, arriving with 200 businessmen from the region alone. The National Commercial Bank (NCB) will also be visiting the Istanbul Boat Show. High interest has also been peaked amongst Chinese and African businessmen. A 35-member delegation has arrived from China's Chamber of Shipping that plan to also tour the city's shipyards in addition to attending the fair. Just like last year, there will be high attendance from countries such as Venezuela, Mexico and Brazil. However it is the arrival of businessmen from South Africa, and countries such as Angola, Mozambique and Swaziland that especially resembles the fair to a meeting of the United Nations.
Fair to put 280 boats on display

The 32nd annual fair will be opening its doors at the Pendik Marintürk Marina allowing for 380 boats to be on display in the sea in a 150,000 square meter area. Spanning between three meters and 50 meters, mega and motor yachts as well as sailboats and catamarans designed in 2013 will be seeking new owners. Over the past 31 years, the Istanbul Boat Show has hosted over a million visitors and this year alone 80,000 are expected to attend the two-day fair.

WE WILL PASS HOLLAND IN 2014 TO BECOME SECOND

Turkey has recently become a popular landmark for the wealthy and prosperous from China, Venezuela, Brazil and Mexico. Turkey's yacht production has consistently shown an annual eight percent growth. In 2012, Turkey became the third top nation in the world for mega yacht production. Next year, production is expected to rise by 30 percent. According to NTSR Fairs Chairman Serkan Tığlıoğlu Turkey stands to surpass Holland in 2014 to become the world's top second nation in yacht production. "If you look at the wealthiness of the profile of the foreigners that have been visiting the Istanbul Boat Show over the past two years, you can see that this growth will be realized," stated Tığlıoğlu.

Turkey's prices are lower than Italy's

Sharing that at last year's fair, Turkish producers received orders for 45 mega yachts, Tığlıoğlu stated, "There has always been an emphasis on foreign brands. However, over the past two years domestic producers have begun to stand out. This year, 35 percent of the yachts produced were done so by domestic manufacturers. Turkey is becoming a world leader in producing yachts over 24 meters' length. According to European producers, prices in Turkey are 40 percent less. For example, a yacht which sells for ten million euros in Italy would sell for six million Euros here."

Turkey runs to the lead in mega yacht production

Explaining that Italy is the current leader in mega yacht production, Serkan Tığlıoğlu stated, "Despite the crisis, Europeans have not given up their passion for boats. Wealthy Europeans have veered their yacht orders from their own countries to China and Turkey. Turkey has especially become an expert in 25-65 meter mega yachts. Businessmen from England, Switzerland and even Italy are now giving their new yacht orders to Turkish producers."