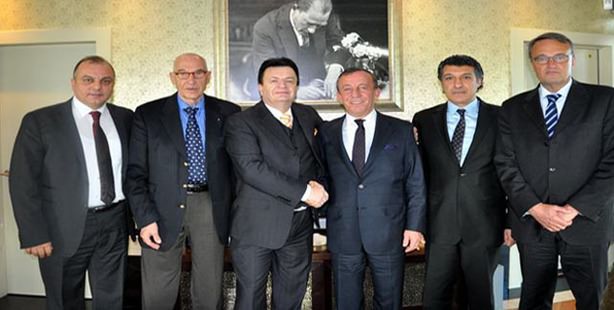 German firms confident of Turkey despite Dec. 17 plot, sign deal with Ağaoğlu German construction company CPBAU and telecom tycoon Manfred Hellwig signed a deal with Turkish construction giant Ağaoğlu Group for their first projects in Turkey. CPBAU CEO said their confidence in Turkey’s economy is not affected by the Dec. 17 operation and German media’s “misinformation campaign” in the wake of the operation.

Hellwig, CPBAU and Ağaoğlu will launch joint projects in both Turkey and Europe with their main focus in the construction and energy industries. CPBAU completed a large number of construction, railway and bridge projects in Germany. The company's annual turnover is 3 billion euros.

To emphasize that Turkey has come a long way, Ali Ağaoğlu, Chairman of the Board at Ağaoğlu Group remarked, "In the past we would literally beg foreign investors to partner with us. Today, they are the ones offering us partnership. This is how far Turkey has come in terms of economics."

Expressing his confidence in Turkish economy, CPBAU CEO Rolf Heinecke said, "Turkey transformed its economy in a single decade while it took Germany 60 years to achieve the same." Heinecke added that neither he nor his partners were intimated by the operations in Turkey targeting businesspeople.