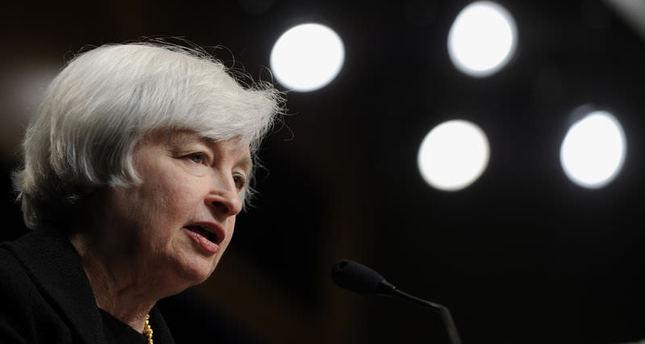 by Associated Press Sep 17, 2014 12:00 am
The Federal Reserve signaled Wednesday that it plans to keep a key interest rate at a record low for a considerable period because a broad range of U.S. economic measures remain subpar.

The Fed said it intends to keep its benchmark rate near zero as long as inflation remains under control, until it sees consistent gains in wage growth, long-term unemployment and other gauges of the job market.

The central bank retained language signaling its plans to keep short-term rates low "for a considerable time" after it ends its monthly bond purchases after its next meeting in October.

"In the Fed's mind, the economy still has work to do, but it's improving," said Mike Arone, an investment strategist with State Street Global Advisors.

Stock prices rose after the Fed issued a statement at 2 p.m. Eastern time after a two-day policy meeting. Traders appeared pleased that the Fed seems in no hurry to raise rates. The yield on the 10-year Treasury note ticked up to 2.59 percent from 2.56 percent before the Fed's statement.

In its statement, the Fed said it will make another $10 billion cut in the pace of its purchases, which have been intended to keep long-term borrowing rates low.

The Fed also issued updated forecasts for growth, inflation and interest rates. The median short-term rate supported by Fed policymakers at the end of 2015 is now 1.38 percent, up from 1.13 percent at its June meeting.

The Fed expects slower growth this year and next than in its last projections issued in June. It predicts that the economy will grow about 2.1 percent this year, down from their June forecast of roughly 2.2 percent.

That reduction likely reflects the sharp contraction in the first quarter of this year. The economy has rebounded solidly since then.

On the eve of the Fed's meeting this week, the financial world had been on high alert for whether the Fed would drop or retain the words "considerable time." Since March, the Fed's statements have said it expects to keep its key short-term rate near zero for a "considerable time" after the bond buying ends.

With job growth solid, manufacturing and construction growing and unemployment at a near-normal 6.1 percent, many analysts had suggested that the Fed was edging closer to a rate increase to prevent a rising economy from igniting inflation.

Other economic gauges have strengthened, too. The number of U.S. job openings is near its highest level in 13 years. Layoffs have dwindled. And consumer confidence has reached its highest point in nearly seven years.

Despite the signs of a stronger economy, most economists think the first increase in the Fed's short-term rate won't occur until mid-2015.

Chair Janet Yellen, who is holding a news conference, has expressed concerns about stagnant wage growth, the large number of part-time workers who can't find full-time jobs and the proportion of the unemployed who have been out of work for more than six months.

Both men are viewed as "hawks" Fed officials who are concerned about the threat of future inflation and believe the Fed should be moving more quickly to raise rates.

Before the policy announcement Wednesday afternoon, the Fed had received good news on inflation with a report that consumer prices fell by a seasonally adjusted 0.2 percent in August, the first monthly drop in prices in 16 months.

Over the past several years, the Fed's ultra-low rates have helped the economy, cheered the stock market and shrunk mortgage rates. A rate increase could threaten to reverse those trends.

In August, U.S. employers added just 142,000 jobs, well below the 212,000 average of the previous 12 months. The slowdown was seen as likely temporary. But some analysts said it underscored that the economic outlook might remain too hazy for the Fed to signal an earlier-than-expected rate hike.