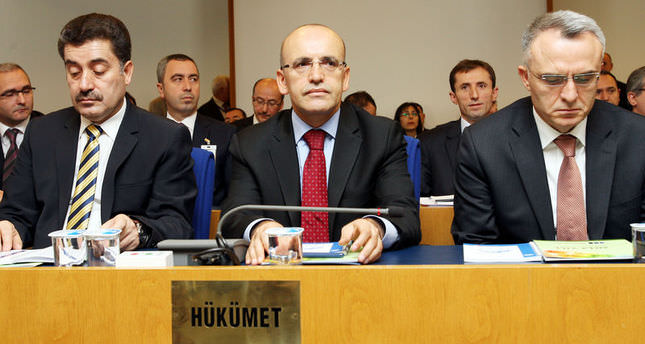 In response to parliamentarians' questions as to whether Turkey can achieve its 2023 goals, Finance Minister Mehmet Şimşek said at Parliament's Planning and Budget Commission meeting that these goals were set before the global economic crisis, adding, "Today's conditions are different and the impacts of the global crisis could not be removed as of yet."

Şimşek stated that the Justice and Development Party (AK Party) government took major steps to tackle great challenges that Turkey encountered ten years ago such as high budget deficits, high inflation and concerns about public debt stock and the banking system. He also stated that improving productivity, competition and innovation will be prioritized in the upcoming term. Touching upon the relationship between competitive power, education, infrastructure and investments, Şimşek said, "All of this requires serious micro-level measures in industry and companies."

Şimşek said that any payments for the new presidential plane - the total cost of which amounted to $185 million and included some modifications - were not rendered from the budget.

"The project cost of the new presidential palace's service building amounted to TL 1.37 billion, TL 963.4 million of which has so far been covered by the Prime Ministry budget. As it is slated to be completed in 2015, a fund of TL 300 million has been allocated from the budget for 2015," he added. "The savings rate was 13.4 percent in 2013 and it is likely to reach around 15 percent by the end of the year. We are aiming to raise this figure to over 17 percent by 2017," Şimşek said.

In response to criticisms that budget targets for 2014 could not be achieved, Şimşek gave examples from the 2013 figures, saying, "We roughly achieved estimations regarding growth, unemployment, inflation, the current account deficit and budget deficit with slight deviations in 2013's Medium Term Program." Şimşek noted that the growth was expected as 4 percent according to the first Medium Term Program of the year and it was revised as 3.3 percent, saying that this revision is more or less in parallel with the IMF's revision for developing countries.

Şimşek further stated that if the EU had met its growth targets and Turkey has not been beset by the problems experienced in Iraq, the country would grow by 4 percent this year.

The Finance Minister answered the claims of some deputies that there is a current account surplus of 1 percent above national income without including the energy bill when the last 12 months are considered.

"Turkey's potential in creating employment is still relatively good. We were forecasting the additional employment of 540,000 individuals, but the real numbers might even be higher," said Şimşek about the employment rates, which are being discussed frequently. Saying that there has been a 2.2 percent increase in the participation rate in the working age population, Şimşek added that therefore, it is not possible for unemployment figures to increase.

He also stated that in terms of geopolitical tensions, going as far back as the invasion of Kuwait by Iraq, the unemployment rates immediately increased in the summer months of the same year. Şimşek also stated that as the Finance Ministry they are working on the current problems of the tax system, adding, "According to the definition of the OECD, the current status of direct taxes is not good and we are preparing an Income Tax Draft Law. The problem here is it is our obligation to prove tax evasions whereas in many other Anglo Saxon countries it is up to the taxpayer. It is not possible for the Ministry to place auditors in every office." Replying to a question about the circular for the sale of agricultural lands to farmers, Şimşek stated that the circular will be published in about a month.