PM Davutoğlu: We work to pave the way for the private sector 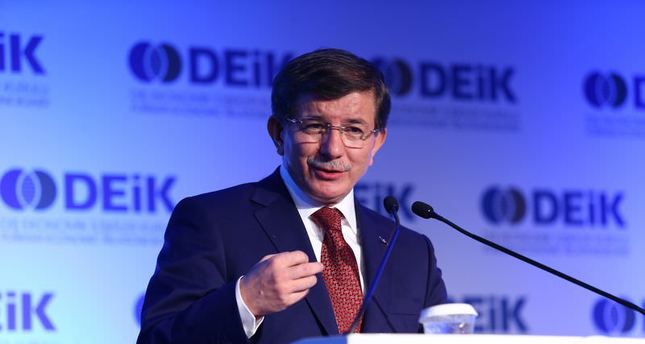 Speaking at the General Assembly of Business Councils of the Foreign Economic Relations Board (DEİK), Prime Minister Ahmet Davutoğlu said, "In New Turkey, the government's duty is to offer you opportunities however, businesses should aim higher. If businesses do not broaden their horizons; then no matter how much politicians speak of high targets, such targets cannot be reached." He further stated that while some criticize the targets set by the government claiming they are "unreachable," when the Turkish economy of 2002 is considered, it is evident that such targets are actually achievable giving the example of gross national income which has increased almost four-fold since 2002.

Davutoğlu stated that the main reason behind such improvements in the Turkish economy was due to a change in mentality and aiming higher. "While various national economies during the 2008 crisis minimized their targets, Turkey, by applying a disciplined budget and very careful economic policies, tried to keep the crisis under control," said Davutoğlu, adding that the government has also started determining strategies for the coming years.

Emphasizing that the main purpose of the Foreign Economic Relations Board is to serve as a board where the government and business world create and share a common mindset, Davutoğlu said that for the past 12 years the government has maintained a stable mindset in dealing with various issues that have arisen from Syria and Kobani.

Touching on the upcoming reforms, the prime minister stated that various legal regulations, especially ones pertaining to occupational health and safety, will enter into force. Davutoğlu further highlighted the increase in foreign investments in Turkey and said that despite a slowdown in global growth, the investments made in Turkey have increased 10 times more between 2003 and 2014 when compared to the 1984-2002 period. Davutoğlu also underlined that the main reason why Turkey handled the global crisis more effectively than some other countries is due to a dynamic society and a spirit of entrepreneurism. "Right after the 2008 crisis, after I was assigned as the foreign affairs minister, we were aware that the European Union would be facing tough times and our exports to the EU would shrink. Therefore, we immediately tried to enter into other markets. We signed free trade agreements with 21 countries; we abolished visa regimes with various countries and we tried to eliminate all kinds of bureaucratic obstacles to withstand the global economic crisis," the prime minister said.

Highlighting the importance of the African initiative that commenced in 2010, Davutoğlu mentioned that in order to minimize the negative effects of the crisis and the clashes in Syria and Iraq, Turkey has tried to enter other markets, including certain Latin American countries, and Turkish businessmen have utilized this opportunity. "Now there is a Turkish businessman in almost each African country. Just in Ethiopia, there are 241 Turkish companies, with $3.5 billion worth of investments," noted Davutoğlu, adding that in the first ten months of the year 38 cities in Turkey have made exports of over $100 million to various countries. Davutoğlu also discussed the adverse effects of clashes ongoing in the town of Kobani and other areas on investments made in eastern and southeastern Anatolia. The prime minister said that they will be providing incentives to businessmen to increase their investments in the region.

The Turkish prime minister also requested the support of the business world in terms of a structural transformation related to exports. "We need to decrease our dependency on imports as the first step. This dependency is causing the current account deficit to increase. As we all know this is our main disadvantage, especially the dependency on energy imports. We need your support for each energy and oil pipeline that will pass through our country and to minimize our dependency on imports," said Davutoğlu.

He also added that in terms of natural resources, Iraq is the most advantageous country in the Middle East. "When reconstruction starts in Iraq, we have to be present. Those who want the relations between Turkey and Iraq to become intense are just trying to prevent Turkey from benefitting from such resources," said Davutoğlu.

Speaking at the assembly Economy Minister Nihat Zeybekci remarked that "the U.S. and EU are coming together via the Transatlantic Trade and Investment Partnership. The U.S. will contrive an investment partnership with 16 Asia-Pacific countries ranging from Japan to New Zealand. More than two thirds of world trade will be in the hands of two separate blocs having an organic bond. As Turkey, we never accept to fall outside of these blocs. We no more say 'a new world will be established and Turkey will take its place in the new world.' We say 'Turkey will be one of the establishers of the new world.' We want to be a country that determines consumption patterns and controls consumption networks in this region. In other words, we want to be a sovereign country having control over both sides of the economy."