PM travels to Australia to take over G20 presidency 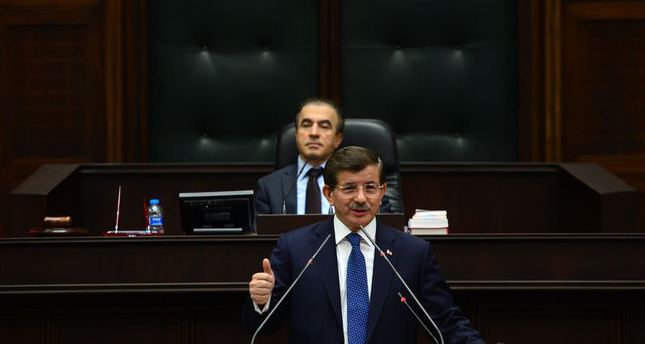 With the development agenda of the United Nations, 2015 will be a critical year for Turkey to take over the presidency of the G20

Turkish Prime Minister Ahmet Davutoğlu held a press conference at Esenboğa Airport, Ankara before he departed for Australia to attend the G20 Leaders Summit. Speaking at the press conference, Davutoğlu underlined the fact that the G20 is one of the most important platforms to discuss the international economy in the world and that since 2008, it has been steadfast in reviewing and developing measures in the wake of the global economic crisis in order to recover from the slump and learn from it. Davutoğlu noted that within the next five years, the objective is to ensure a 2 percent increase in the collective growth of G20 countries as an addition to current trends, and employment targets will be revised in accordance with this goal.

"We have announced that nine sectors out of 25 will be included in the Structural Transformation Program which the G20 will adapt as one of the first applications of its action plan.

"We will have the chance to evaluate the action plans, strategies and growth targets of all countries along with the Brisbane Action Plan. Along with the financial and monetary policies included in this action plan, it also includes structural reforms in investment, trade, development and employment. Therefore, we will have the chance to examine the latest developments in the global economy," Davutoğlu said.

Stating that developing a common perspective in dealing with various matters arising in the fields of development, trade, energy, investment, global finance and infrastructure, which are closely linked with the global economy, will headline the issues to be discussed at the G20 summit. Davutoğlu further added that restructuring international economic institutions like the IMF is also another significant topic to be discussed.

"The comprehensive IMF quota and administration reform, which was accepted in 2010 and is yet to be implemented, will also be discussed. This IMF reform is crucial in terms of determining how the newly rising economies will be represented within IMF's administration. And this is also crucial for Turkey to be involved in the administration of the G20 and assume an active role," noted Davutoğlu.

Davutoğlu further stated that Turkey is assuming the presidency of the G20 in a very critical year, since 2015 is very important in terms of the development agenda of the United Nations. "Turkey will have to coordinate the decisions that will be and have been passed in this respect at the G20 and will also have the chance to discuss the development agenda of the United Nations," Davutoğlu explained.

The Turkish prime minister also highlighted that they will focus on small and medium-sized enterprises during Turkey's presidency and since 2010, Turkey has been acting as a coordinator for underdeveloped countries, which has affirmed its role as a bridge between less developed economies in the world and the developed ones.

Deputy Prime Minister Ali Babacan, in charge of the economy and one of the figures spearheading Turkey's G20 strategy, said tackling sluggish global growth and increasing the voice of low income countries would be among Turkey's priorities. "During its term as G20 chair, Turkey will become a bridge between the low-income, emerging countries and developed nations. Our aim is to enhance the interaction," he told Reuters in emailed comments, en route to the G20 summit in Brisbane.

The Group of Twenty, also known as the G20, is a forum for governments and central bank governors from the world's 20 major economies. The G20, established in 1999, became increasingly influential after heads of state met in 2008 after the global financial crisis. The G20 membership comprises a mix of the world's largest advanced and emerging economies, representing about two-thirds of the world's population, 85 percent of GDP and over 75 percent of global trade. The members of the G20 include the EU and 19 individual countries: Argentina, Australia, Brazil, Canada, China, France, Germany, India, Indonesia, Italy, Japan, the Republic of Korea, Mexico, Russia, Saudi Arabia, South Africa, Turkey, the United Kingdom and the United States. The EU is represented by the European Commission and by the European Central Bank (ECB).

The work of G20 members is supported by several international organizations like the United Nations, the Organisation for Economic Co-operation and Development (OECD), the World Bank and the International Monetary Fund (IMF) that provide policy advice.

The G20 also regularly engages with nongovernment sectors. Engagement groups from business (B20), civil society (C20), labor (L20), think tanks (T20) and youth (Y20) are holding major events during the year, the outcomes of which will contribute to the deliberations of G20 leaders. Reflecting its nature as an informal political forum, the G20 does not have a permanent secretariat. Instead, the G20 president is responsible for bringing together the G20 agenda in consultation with other members and in response to developments in the global economy. To ensure continuity, the presidency is supported by a "troika" made up of the current, immediate past and next host countries. During Australia's presidency, the members of the G20 troika have been Australia, Russia and Turkey. Previous hosts of the G20 Leaders' Summit were the United States (in 2008 and 2009), the United Kingdom (2009), Canada (2010), the Republic of Korea (2010), France (2011), Mexico (2012) and Russia (2013).