Production of the local tanks to start in 2017 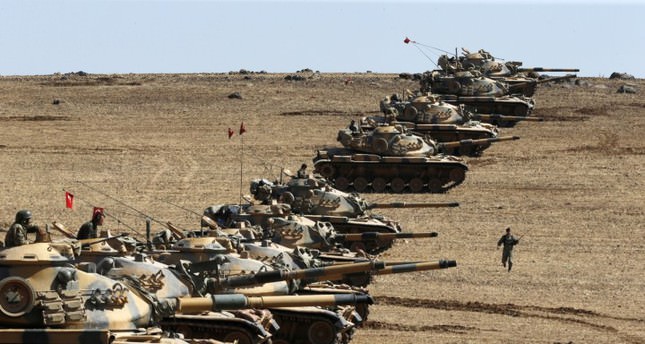 by Daily Sabah with IHA Nov 13, 2014 12:00 am
The Parliament's Planning and Budget Commission convened on Thursday to discuss the Defense Ministry's budget. Delivering a presentation to the parliamentarians, Defense Minister İsmet Yılmaz said that the design process of the Altay Main Battle Tank (MBT) was completed in May and that two main prototypes are still undergoing verification testing even though production has started, adding, "The movement and shooting abilities of two previously produced prototypes are being tested. We predict that mass production of the Altay MBT will begin in 2017 and presented to the Land Forces Command." Yılmaz noted that 473 mine-resistant vehicles out of a total 614 that were produced as part of the Kirpi (hedgehog) Project went through production controls successfully, while the remaining 141 vehicles would also be delivered soon.

Yılmaz also said that testing and improvement activities are continuing within the scope of the F-35 Joint Strike Fighter Program, which consists of partnerships and logistic support of a number of countries for the production of F-35 aircraft. "It is expected that F-35 aircraft will be an important element of the Turkish Air Force with its sophisticated capabilities such as information fusion, stealth and advanced sensors in the 2020s. National munitions will also be integrated into them. Two of the aircraft have already been ordered," Yılmaz added. Touching on the recent NATO Summit held in the U.K., Yılmaz said that NATO member countries admitted that they would use 2 percent of their gross domestic product (GDP) for defense spending and at least 20 percent of it would be dedicated to the procurement of major weapon systems in the next 10 years. "So, Turkey is also expected to raise its military spending to 2 percent of GDP," Yılmaz concluded.