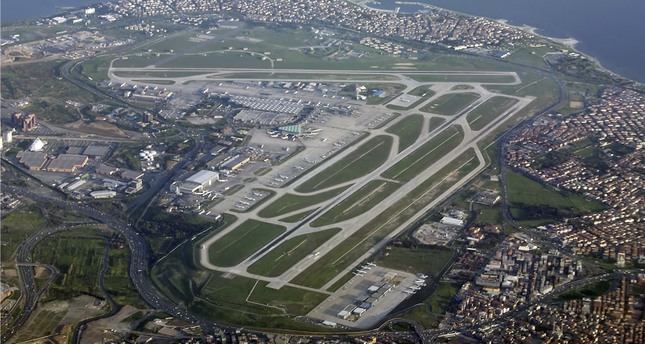 by Daily Sabah Nov 19, 2014 12:00 am
International Terminal of Atatürk Airport will be expanded by 27,000 square meters upon the agreement between TAV and the General Directorate of State Airports Operations (DHMİ).

Sani Şener, CEO of TAV Airports said, "Atatürk Airport is providing a significant service for Turkey's air traffic. Last week, a new ramp investment was put into service and an additional 26 car parks will increase parking capacity. Also, when THY, Havaş and Çelebi companies were moved to the new cargo area, the old area became available to expand the international terminal." According to the agreement, eight new bridges will be added. Additionally, the number of check-in counters, baggage-claim capacity and parking area capacity will be increased with an investment valued at 75 million euros. Şener remarked, "We cannot think that we don't need to make investment since other companies including DHMİ, THY, Havaş and Çelebi are investing. We have an administrative mentality giving priority to social benefits and Turkey's interests besides profitability. TAV is one of the rare global brands emerging from Turkey. Besides DHMİ, THY and other airline companies, TAV has a great share in that Atatürk Airport became one of the most important airports in the world."