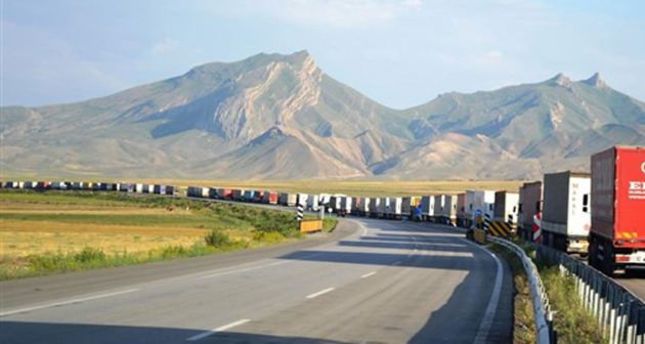 by Daily Sabah with AA Nov 19, 2014 12:00 am
Iran's Ambassador to Turkey Alireza Bekdali said on Monday that the latest sticking point with regards to transit fees for trucks travelling between Iran and Turkey was solved after negotiations between the two neighbors.

The deal comes after Turkey retaliated with increasing transit fees for Iranian trucks when Iran hiked their own rates for Turkish trucks. Turkey's Customs and Trade Minister, Nurettin Canikli, previously said: "Turkey only used its right to retaliate. We try to negotiate with Iran, but they insisted on that fee. Our transport sector cannot progress in Iran with that high fee." Canikli acknowledged that the high transit fees were affecting the numbers of Turkish trucks crossing the border into Iran. Speaking to reporters in the Turkish capital, Ankara, Ambassador Bikdeli said: "We accepted this request due to the insistence of our Turkish friends and their imposition of some taxes."

Bikdeli also said that entry and exits at the Turkey-Iran border continue in line with the current system. "Certain arrangements should be made within the next 10 days for the new system," Bikdeli added. Bikdeli further emphasized the role of natural gas in Turkey-Iran relations, and reminded that Turkey applied to arbitration for a reduction on natural gas prices. According to Bikdeli, both sides will adhere to the decision no matter what it is. Touching on the subject of Iran's natural gas, which will be run to Western countries through Turkey, Bikdeli said, "Turkey is the best route to transfer Iran's natural gas." According to the Turkish Customs and Trade Ministry, Iran previously charged each Turkish truck that passed through its territory using the formula: distance in kilometers multiplied by 0.32. Iran then increased the rate to distance in kilometers multiplied by 0.32 times 0.8 on Oct. 10.

Turkey, in response, then increased its transit fees for Iranian trucks using the same formula. For example, if an Iranian truck passes from Turkey's eastern customs gate to the country's western customs gate, the distance will be roughly 1,200 kilometers. According to the previous formula, this truck would pay $307 as transit fee, but according to the recent hike, each driver would now have to pay $614.