US Chamber of Commerce opens regional office in Istanbul 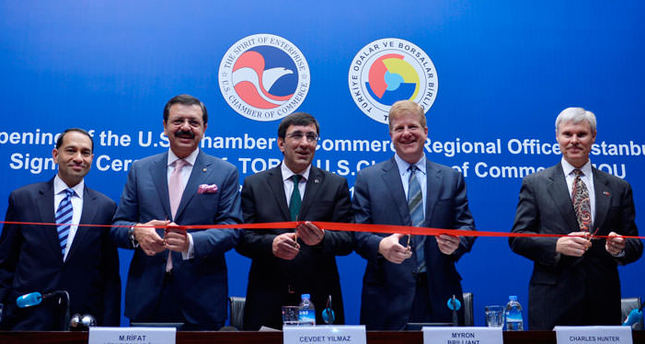 As negotiations on the Trans-Atlantic Trade and Investment Partnership continue with Turkey seeking a fair position, the U.S. Chamber of Commerce opened a regional office in Istanbul, which has been interpreted as a positive sign

The U.S. Chamber of Commerce opened an office in Istanbul to aid its regional efforts yesterday with the attendance of the Minister of Development Cevdet Yılmaz. This is the second regional office of the chamber after Brussels. The opening ceremony took place with a signing of cooperation between the Turkish Union of Chambers and Commodity Exchanges (TOBB) and the U.S. Chamber of Commerce. Speaking at the ceremony, TOBB's Chairman Rifat Hisarcıklıoğlu said that they are aiming to improve the financial relations between the two countries. Hisarcıklıoğlu said, "We want to extend the scope of bilateral relations and investments and increase business volume. We want to take innovative steps and we want to integrate our forces by improving relations firstly within our region and then with third party countries."

Hisarcıklıoğlu further stated that both TOBB and the U.S. Chamber of Commerce have now adopted a vision for improving bilateral relations and concrete steps have been taken within the last two years, including the Memorandum of Understanding signed in December, 2012. "There are many legal platforms established for improving Turkish-American relations and our public enterprises meet regarding various subjects, including financial matters. The framework of the cooperation established between TOBB and the U.S. Chamber of Commerce is an initiative of private sector enterprises. It is the mutual target of the most powerful institutions of the business world. The idea to open a regional office surfaced as a result of this cooperation," said Hisarcıklıoğlu.

Emphasizing that they want more American companies to benefit from the financial and legal stability established in Turkey, Hisarcıklıoğlu said that currently the share of Turkey was only 0.3 percent in the American market and Turkey was the 41st country for the U.S.'s exports. "This is not only the current situation; it has always been the same. As Turkish industrialists and merchants, we cannot enter into the U.S. market," added Hisarcıklıoğlu. He stated that the U.S. is not tens of thousands of kilometers away anymore and will be in the center of Istanbul, further adding that direct investments from the U.S. are very low. Regarding Turkey attending the TTIP negotiations between the U.S. and the EU, Hisarcıklıoğlu underlined the importance of this office for future lobbying efforts in the TTIP negotiations.

Assistant Chairman responsible for International Relations for the American Chamber of Commerce Myron Brilliant underlined the importance of the regional partnership they want to establish with Turkey.

"From now on we will be here and continue to be here," said Brilliant while reminding Hisarcıklıoğlu's request for the U.S. to increase its presence in Turkey. Brilliant also touched on the benefits of the memorandum of understanding, further adding, "We chose Turkey as our second regional office as we do business with many countries such as China, India, Brazil and Russia. Turkey's position at the crossroads of Europe, Asia and the Middle East makes it a vital commercial hub that American companies are eager to engage with. We know that there is a huge opportunity here, and that the U.S.-Turkey relationship is yet to achieve its full potential."

Speaking to Daily Sabah, Istanbul Consul General of the U.S. Charles Hunter said, "We are very excited about this partnership between two major organizations representing the U.S. and Turkish private sectors. The opening of this Istanbul office as a Middle East Commercial Center clearly recognizes the regional and global significance of building a stronger U.S.-Turkey economic relationship. Between 2011 and 2013, bilateral trade between the U.S. and Turkey hit record levels, reaching nearly $20 billion per year. Through continued government and private sector efforts like this one, we hope to see this kind of growth reach its full potential." He also underlined the importance of the office and highlighted its importance in terms of establishing regional peace and prosperity.

After the opening ceremony, the memorandum of understanding between TOBB and the U.S. Chamber of Commerce was re-signed in order to improve the commercial and economic relations between Turkey and the U.S.