Sotheby’s auction house CEO to step down after weak sales 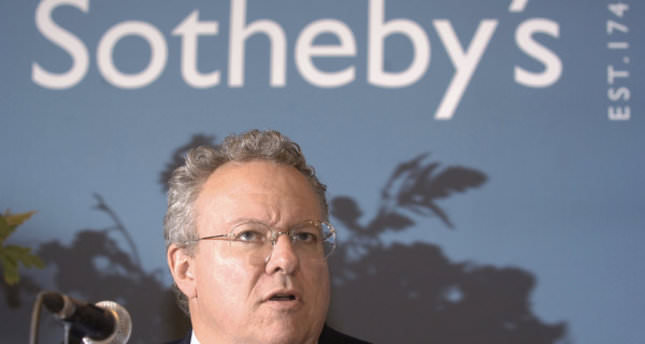 by French Press Agency - AFP
Nov 22, 2014 12:00 am
Sotheby's announced Thursday that CEO William Ruprecht is to step down, a week after lackluster contemporary art sales and a year after a bruising battle with billionaire activist Daniel Loeb. Ruprecht, 58, will stand aside by mutual agreement with the board of directors but will stay as chairman, president and CEO until his successor is in place to ensure a smooth transition, it said. The auction house, one of the most venerable in the world, has faced increasingly stiff competition from rival Christie's, who outperformed Sotheby's at contemporary art auctions last week. With the business of contemporary art booming like never before, Sotheby's sold works worth $343.7 million compared to $852.9 million at Christie's - the company's highest ever total - at flagship evening sales held each November in New York. "The board is sharply focused on upholding the world-class standard of excellence that Sotheby's has long represented to our clients and achieving Sotheby's full long-term potential for the benefit of our shareholders," lead independent director Domenico De Sole said Thursday. "We are moving with a sense of urgency but we will take the time we need to find the right leader for Sotheby's at this critical juncture in its continuing evolution," he added. The announcement comes just 13 months after an acid-tongued Loeb, chief executive of hedge fund Third Point and Sotheby's biggest shareholder, demanded Ruprecht go and branded the company "an old master painting in desperate need of restoration." Sotheby's appointed Loeb and two allies to its board in May, at the time averting a shareholder vote over the direction of the fine art auctioneer that could have upended company management. De Sole on Thursday thanked Ruprecht, who became CEO in 2000, for guiding the company "through serious challenges into an era of significant growth and development." Ruprecht, who was elected chairman of the board in 2012, said the last few years had been the most successful in the company's history. "I am comfortable and confident saying Sotheby's is well positioned for the next chapter of its success, and I will do all I can to contribute to a smooth leadership transition," he said.