Saudi sights set on US shale at crucial OPEC meeting 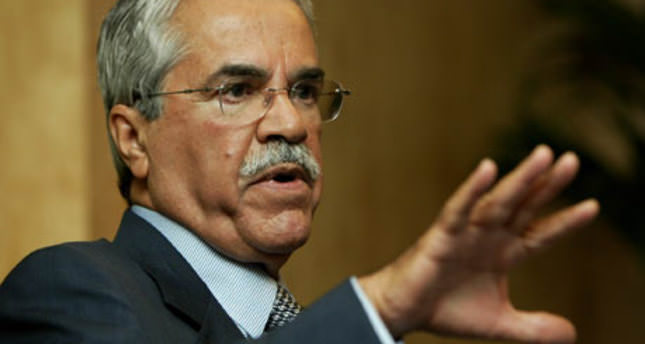 OPEC's biggest crude producer Saudi Arabia will have its sights set on the upstart U.S. shale oil business at a crucial cartel meeting to debate possible output cuts tomorrow. Analysts say the kingdom is content to see shale oil producers - and even some members of the cartel - suffer from low prices and will resist pressure to reduce output and shore up the cost of oil. A barrel of crude has plunged by about one third in value since June to around $80 in an increasingly competitive market. Saudi Oil Minister Ali al-Naimi was silent about his government's intentions Monday as he arrived in Vienna ahead of the OPEC gathering. "Is this the first time we have oversupply?" he was quoted as saying by Dow Jones Newswires when questioned about current supply and demand. However his Iraqi counterpart Abdel Mahdi arrived in Vienna pushing for action, deeming the steep price drop "not acceptable." Analysts say the kingdom is strong enough to withstand lower prices. "Saudi Arabia wants to try and knock out shale oil competitors from the market," said Saudi economist Abdulwahab Abu-Dahesh. "They have the fiscal strength to remain steadfast for two to three years," he told AFP. Oil prices have collapsed to four-year lows on factors including dampening demand in a sluggish world economy, a sharp rise in output from shale oil and other unconventional sources, and a strong dollar. Global oil prices fell Monday amid skepticism that OPEC would move aggressively to lift prices. U.S. benchmark West Texas Intermediate crude for January delivery dipped 73 cents to $75.78 a barrel on the New York Mercantile Exchange. Meanwhile European Brent oil for January dropped 68 cents to $79.68 a barrel in London. Although Saudi Arabia and its Gulf neighbors the United Arab Emirates and Kuwait could bear the burden of lower production, "I don't think they will cut because they will lose their market share," said Fahad Alturki, chief economist and head of research at Jadwa Investment in the Saudi capital. Figures from the U.S. Energy Information Administration showed Saudi exports to the U.S. dropped by almost 30 percent from 1.25 million barrels per day in July to below 900,000 barrels per day in August, although it remains the second largest U.S. supplier after Canada. The kingdom then cut its prices for crude sold to the U.S. market, sending global prices plummeting in early November by almost $2. Analysts saw the Saudi move as an effort to hold onto North American market share against cheaper oil from U.S. shale fields. Saudi Arabia also raised prices for its oil sold to Asia and other areas but was apparently "concentrating more on defending its market share in the U.S.," Commerzbank analysts said. The kingdom exports two-thirds of its crude to Asia but this year has seen its market share fall in China and India, said analysts from Platts, a global energy information provider. OPEC pumped 30.6 million barrels per day last month, above its 30 million barrels per day target, according to the International Energy Agency which advises member countries on energy policy. Of that total, Saudi Arabia produced around 9.6 million barrels per day in October, according to data cited by OPEC. Some analysts expect OPEC's 12 members to retain the 30 million barrels per day ceiling in Vienna.