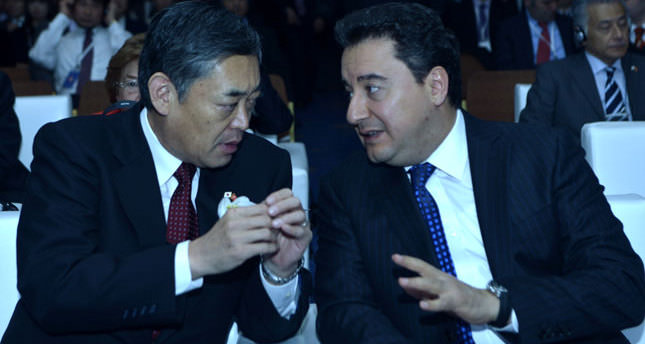 Deputy Prime Minister Ali Babacan stated that Turkey and Japan are working on an economic partnership and a customs agreement for the occasion of the 90th Anniversary of Diplomatic Relations between Japan and Turkey which was held in Istanbul yesterday. He stated that since the EU and Japan are negotiating a free trade agreement Turkey doesn't want to be left out of this agreement as a Customs Union member. Emphasizing that Turkey wants to work on a free trade agreement with Japan parallel to the EU-Japan free trade agreement, Babacan said that the economic partnership is a kind of preparation for the free trade agreement. Touching upon the development of private sector support, Babacan remarked, "Development with public spending is not sustainable; therefore, we believe development and employment can take place with the private sector. Private sector investment occurs with trust, which has a difficult value and is earned step by step. Remaining true to given promises, announcing a program and following it, setting a target and working hard to reach it are elements in earning trust. I want to quote from Coca Cola CEO Muhtar Kent 'brand is a promise but a good brand is a kept promise,' which is the approach we are adopting as Turkey's economy administration."

"In Japan, an important period has started with the economic policies of Prime Minister Shinzo Abe. The first results of Abenomics policies are encouraging but the shrink in Japan's GDP in the third quarter is a significant issue to pay attention to," said Babacan adding, "We believe that Japan's economic policy will be completed with the third arrow; namely, structural reforms and the result will be good."

Comparing emerging economies with developed economies, Babacan stated, "Emerging economies have less public debt and their banking systems are stronger compared to developed countries. They have fresh economic crisis experiences, which is an important thing, I think. Countries having no crises for 30-40 years don't know how to deal with an economic crisis when they face it. In such an environment, we believe emerging economies will be the source of world dynamism. Turkey has seen huge developments in the last 12 years. We have made many radical reforms in the banking sector. We have become a country with a low budget deficit and a strong banking system. We recovered from the economic crisis fast. After Turkey's gross national income increases by $2,000 per capita, we will enter the group of countries with high-incomes. We are the third country in terms of humanitarian aid contributions."

CEO of IHI, a Japanese company producing ships, aero-engines, industrial machines, suspension bridges and other transport-related machinery said, "They have built İzmit Bay Crossing Bridge, the largest suspension bridge in the world [sic] with maximum localization by being partners with several Turkish companies."

Vice Chairman of Taisei Corporation Satoru Ogata said, "An undersea rail tunnel under the Bosporus strait has been a dream of Turkey for a long time and we managed to turn this dream into a reality in cooperation with Turkish companies. The reasons for the project's success come from trust between the partners, the 'for the Project' mind and Professional spirit."

Deputy Minister of Science, Industry and Technology, Davut Kavranoğlu announced that a Turkish-Japanese Science and Technology University would be established. "This university will have the standards of world famous universities such as MIT and Tokyo University. It will mostly give doctoral education, which is a significant need for Turkey to develop."