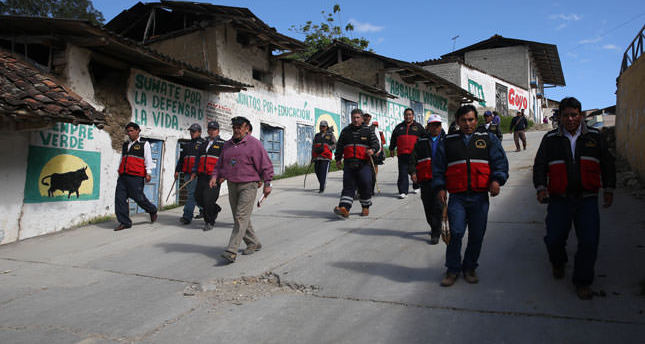 Distrust of police has made private security big business in Latin America. An army of 4 million private security agents make up an industry growing 9 percent annually and is projected to reach $30 billion by 2016

A panic alert flashed across Alberto Herrera's computer screen. Men claiming to be with the notorious Gulf Cartel had stopped a convoy transporting chemicals through a lawless region of northeastern Mexico. They seized two drivers from an escort truck and demanded the valuable cargo in exchange for their release.

Giant flat-screen monitors blinked with the GPS locations of dozens of vehicles carrying cargo coveted by criminals. The phone chatter and chirping two-way radios sounded like a police dispatch center, but this was the emergency response room of International Private Security, a Mexico-based company that helps international clients like PepsiCo, Audi and BP do business in regions plagued by organized crime. A direct line to Mexico's federal police sat on Herrera's desk, but he had orders from this client not to use it. Instead, the client's crisis team negotiated the release of the drivers and their cargo. "They didn't want us to call the police," said the 32-year-old Herrera. "People don't necessarily trust the cops."

Distrust of police has made private security a big business in Latin America, where a majority of police forces are deemed incompetent or corrupt or both. An army of nearly 4 million private security agents make up an industry growing 9 percent a year and projected to reach about $30 billion by 2016. That's more than the economies of Paraguay or El Salvador. IPS alone has doubled its employee ranks to 4,000 over the last five years. Across the region, private guards outnumber public officers beyond the global average of 2-to-1. In Brazil, it's 4-to-1; in Guatemala, 5-to-1; and in Honduras, it's close to 7-to-1.

"The private sector should be a complement (to the police)," said Boris Saavedra, a national security professor at the Center for Hemispheric Defense Studies in Washington. "But in some countries, they're not the complement: They are the main actor."

Private guards are part of everyday life in Latin American cities. With large guns and bullet-proof vests, they guard bakeries, even mattress deliveries, and ride shotgun in trucks carrying anything from Coca-Cola to cold cuts. They don earpieces and hide pistols under dark suits as they escort executives' children to school. But they're not solving rampant crime. The guards-for-hire offer protection to the wealthy and middle-classes, leaving the poor majority to fend for themselves in a region already suffering from world's worst income disparity. Poorer residents get by however they can: forming vigilante groups or paying thugs to leave them alone.

Drug gangs rule through fear, often employing local police to work for them. Police in southwestern Guerrero are accused of handing over 43 college students to a drug gang which, authorities say, killed them in September. Such crimes foster a state of fear. Insecurity is so pervasive that 13 percent of Latin Americans or nearly 75 million people feel the need to move to escape crime, according to the United Nations. Fear of gang violence is one of the main forces that has sent thousands of Central Americans, including unaccompanied children, toward the U.S. border.

"People feel powerless in the face of violence and act with instinct rather than reason," said Guatemala psychologist Marco Antonio Garavito.

Such displays do nothing to rid departments of rogue cops, he said. "It's the same bad guys with new clothes." The spread of private policing, however, comes with unpredictable results. Growth of the industry has outpaced government regulation, creating a "buyer-beware" market for those hiring security officers. Most of the region's security businesses operate without formal registration. In Venezuela, Julio Delgado, a guard who helped form an association of private security workers, estimates that 25 percent of his colleagues are committing violent crimes in their off hours. The bodyguards of a Venezuelan congressman are accused of helping plan his October slaying. Authorities in Brazil said last month a 26-year-old security guard confessed to killing 39 people, shooting many of them randomly from his motorcycle. In Mexico, the head of Elite Systems, a Guadalajara-based protection and alarm-service operation, Arnoldo Villa Sanchez, was alleged by the U.S. government to be security chief for the cartel led by Hector Beltran Leyva before the capo's arrest in October.