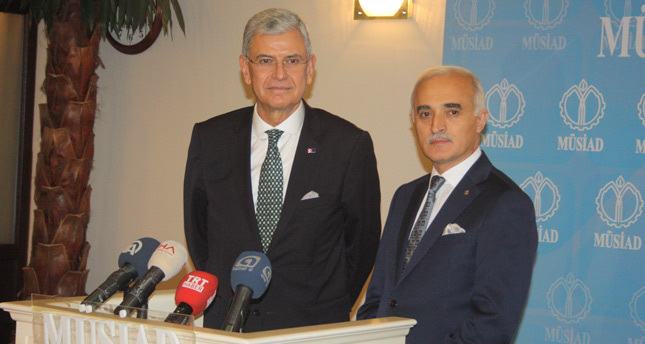 by Daily Sabah Dec 26, 2014 12:00 am
EU Affairs Minister and Chief Negotiator Volkan Bozkır visited the Turkish Industrialists' and Businessmen's Association (TÜSİAD) and the Independent Industrialists' and Businessmen's Association (MÜSİAD) yesterday - two leading business associations of Turkey - to garner their support for customs union process. Bozkır delivered a press statement following the meetings held with each association's board of directors.

During his visit to TÜSİAD, Bozkır said that the EU Affairs Ministry will provide a platform where the Economy Ministry and influential institutions, which play a significant role in exports and imports, will work together on customs union negotiations.

Bozkır emphasized that they will frequently meet to evaluate the common actions regarding Turkey's key decisions on negotiations to revise the Customs Union Agreement and various scenarios encountered during the EU membership process. In response to a question of how the revision process of the Customs Union will run, Bozkır said, "The Customs Union is a relationship that benefits Turkey. It is important that Turkey holds 45 percent of exports in a trade volume of $183 million. Continuing with this will benefit both the two parties. We have decided to hold negotiations with the EU in order to include such sectors as agriculture, services and public procurements in this customs partnership. "

TÜSİAD President Haluk Dinçer said that they reviewed the studies conducted by Bozkır and the EU Affairs Ministry over the past four years, and that they "find the government's 2023 goal for EU membership exciting and ... support it. The studies conducted by the minister and the Ministry of EU Affairs as well as the strategies set by them, including the national action plan and communication strategies, is exciting for us. That the minister took over this position only four months ago is a wonderful opportunity for Turkey. We are happy with the EU membership process and studies. We know that our task is not an easy one, but we maintain our confidence in the 2023 goals." MÜSİAD President Nail Olpak said that Turkey's EU membership process has pros and cons, and added, "The EU is the greatest trading partner of Turkey. More than 76 percent of foreign investments in Turkey come from the EU, while 67 percent of Turkish companies' foreign investments are made in the EU."