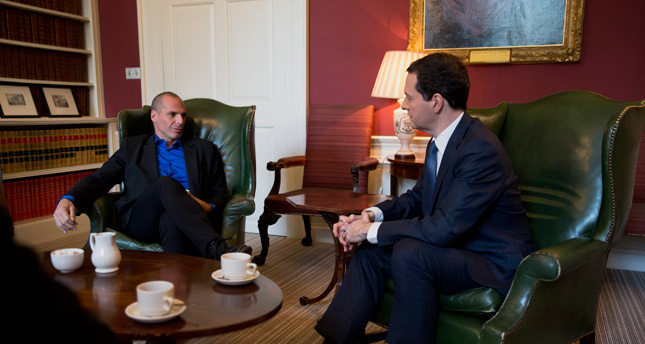 Greece’s new leaders embarked yesterday on a diplomatic campaign to win backing for a renegotiation of a 240 billion euro bailout, winning support from U.S. President Obama and a stark warning from Britain

On a European charm offensive in the face of German opposition, Finance Minister Yanis Varoufakis met his British counterpart George Osborne in London, while Prime Minister Alexis Tsipras held talks in Cyprus. Greek stocks, which have been volatile since the Jan. 25 election won by Tsipras's left-wing Syriza party, jumped more than 5 percent after U.S. President Barack Obama warned that imposing austerity on Greece could backfire on its creditors. "You cannot keep on squeezing countries that are in the midst of depression," Obama told CNN. "At some point, there has to be a growth strategy in order for them to pay off their debts to eliminate some of their deficits." Obama said the Greek economy was in "dire need" of reform but warned that drastic changes were tough to implement in a struggling economy. A source travelling with finance minister Varoufakis said the "whole government was very happy" to hear Obama's comments in the face of hardening rhetoric from austerity proponents.

In Cyprus on his first foreign trip since coming to power, Tsipras said he had not expected so much international support for his campaign and stressed that Greece wanted a wider debate about debt for "all the peoples of Europe." "Europe is in crisis, not just Greece and Cyprus," he said. He also doubted the legality of the current system of supervision of indebted nations by the so-called "troika" of creditors, the International Monetary Fund, European Union and European Central Bank (ECB). Tsipras will travel to debt-laden Italy on Tuesday and on to Brussels on Wednesday for talks with European Commission president Jean-Claude Juncker.

In London, British minster Osborne warned that the stand-off between Greece and the eurozone was "the greatest risk to the global economy" but said that he had enjoyed a "constructive discussion" with Varoufakis. In comments shown on British television, he said all sides should "act responsibly." The Greek government source said Varoufakis was "delighted" following the talks, adding: "having a key ally like Britain in the EU is a major asset." The Greek minister was later to meet with around 100 figures from London's financial sector, including investors and bankers exposed to Greek debt. "We are very open to investment," stressed the source, who insisted that Greek debt would be serviced "on terms that will have no detrimental effect on private bondholders." Varoufakis said Sunday that Greece did not want a promised loan tranche of 7.2 billion euros, saying it would just add more debt to the pile.

Setting out a timetable for a revised debt deal, which has met strong German opposition, Varoufakis said that if Athens had until the end of the month to come up with detailed proposals, it could reach an agreement with international partners six weeks later. Tsipras has tried to calm nerves by saying he did not intend to renege on commitments to the EU and IMF. "It has never been our intention to act unilaterally on Greek debt," Tsipras said in a statement to Bloomberg News. But the country "needs time to breathe and create our own medium-term recovery program," Varoufakis told reporters in Paris on Sunday that he also wanted to visit Germany, which has shouldered the bulk of Greece's loans. "It is essential that we meet," Varoufakis said, referring to German Finance Minister Wolfgang Schaeuble. German Chancellor Angela Merkel said Monday she wanted "friendly relations with the new Greek government, which doesn't preclude likely tough talks."

Merkel on Saturday had ruled out fresh debt relief, however, telling the Hamburger Abendblatt daily, "There has already been voluntary debt forgiveness by private creditors, banks have already slashed billions from Greece's debt."

Greece's Deputy Prime Minister Giannis Dragasakis insisted late Sunday that Athens could still reach a "political agreement" with the ECB, satisfying the central bank's demands for reform and maintaining liquidity to Greece's hard-hit lenders. Despite a restructuring in 2012, Greece is still lumbered with debts of more than 315 billion euros, upwards of 175 percent of gross domestic product (GDP) - an EU record. But in its first week in power, the government scrapped the privatization of Greece's two main ports and the state power company and announced a major increase in the minimum wage.

Syriza's stunning election success sent shockwaves through Europe and has encouraged other anti-austerity parties. At least 100,000 people took to the streets of Madrid on Saturday in support of the Spanish party Podemos, which has surged in polls ahead of elections late this year. But Spain's Budget Minister Cristobal Montoro on Monday rejected any notion of the EU "changing the rules" over Greece's bailout, noting that Spain had respected similar austerity imposed by international creditors.