Erdoğan calls Central Bank to ‘pull itself together’ 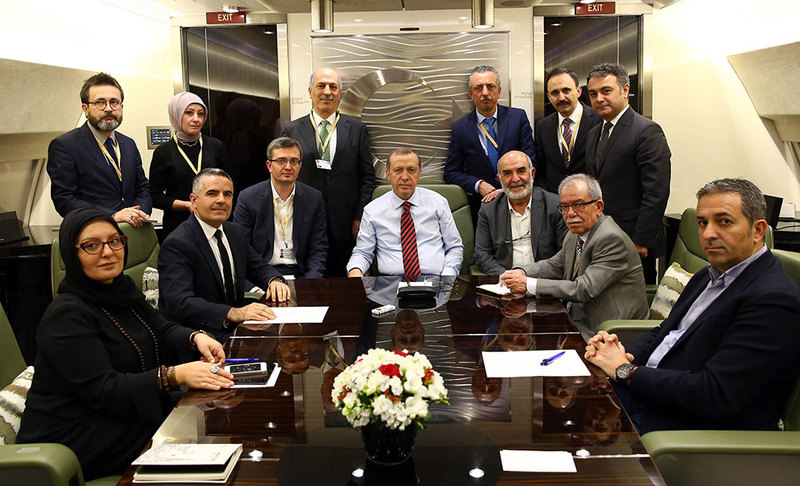 President Erdoğan continued his criticism of central bank Governor Başçı by saying they canot act according to the ‘interest lobby.’ Including Deputy PM Babacan in his criticism, Erdoğan called on them to ‘pull themselves together’

President Recep Tayyip Erdoğan, who had heavily criticized Turkey's Central Bank (CBRT) and its Governor Erdem Başçı for the last couple of months regarding the interest rate policy, included deputy prime minister in charge of the economy, Ali Babacan, in his criticism. Speaking to some journalists on his way to Saudi Arabia, Erdoğan stated that Governor Başçı had requested a meeting with him and added, "He [Başçı] has a request nowadays, of course I will call him and talk to him. I have already spoken to the minister [Babacan] that he reports to. I see that they are [Babacan and Başçı] are in the same position. They now have to pull themselves together."

"While there was an economic crisis in the world, we were careful of one thing. We never ceased in investing, even though it was criticized, we did not reduce our speed. If interest rates fall, investments will continue. We needed this to cope with the unemployment problem, which had increased to double digits," Erdoğan added.

"If the CBRT says that its duty is only inflation and price stability, it means that it does not understand its duty" Erdoğan said, adding that "If the [CBRT] revises the inflation [predictions] three or four times in a year, there is a problem here. But what you do is that you try to keep up [a war of] words with the President and your criticizers. Tomorrow they will say that the currency rates went up again, if so, then take precautions. This is not sustainable with acting upon the decisions of Western powers, they cannot act with the orders that the 'interest lobby' gives. All other central banks in the world put up a fight with inflation, step forward in the currency order. But ours is running away" Erdoğan said.

Regarding the question of whether the CBRT and finance administration has links with the Gülen Movement, also referred to the 'parallel state,' Erdoğan said that it is being investigated whether such figures exist within the lower cadres, but he cannot make such claims about those in positions of decision-making. "I was the one who approved him [Başçı] to this position with great hopes" Erdoğan said, answering a question regarding the Governor's health condition. Erdoğan said that he was not informed about such a problem, while wishing Başçı a quick recovery.
Re-stating his position on interest rates, Erdoğan said "As the President, I can make such criticism. The reality is that if the interest rates do not decrease, Turkey, which strongly needs investment, cannot make investments. Hence, the private sector has serious weaknesses regarding investments, we are at a standstill."

Erdoğan also added that he may wish to contribute if the government acts to change the CBRT legislation, but that the issue is the government's responsibility.

Following Erdoğan's earlier criticism last week, which had questioned whether Başçı and the CBRT have outside allegiances, it was widely rumored that Babacan and Başçı had resigned from their posts, a claim which was rejected by the government.

Babacan was among the founders of the AK Party in 2001, and had served in five consecutive AK Party cabinets since 2002 in ministerial posts regarding the economy, including in three cabinets of Erdoğan. He is regarded as the mastermind behind the government's economic policies that gave way to important structural reforms and high growth rates between 2002 and 2008, while steering the economy successfully during the 2008 financial crisis and its aftermath. He had also served as the minister of Foreign Affairs for two years following his predecessor Abdullah Gül, who was elected president in 2007.

Burhanettin Duran is General Coordinator of SETA Foundation and a professor at Social Sciences University of Ankara. He is also a member of Turkish Presidency Security and Foreign Policies Council.
Last Update: Mar 02, 2015 6:44 pm
RELATED TOPICS