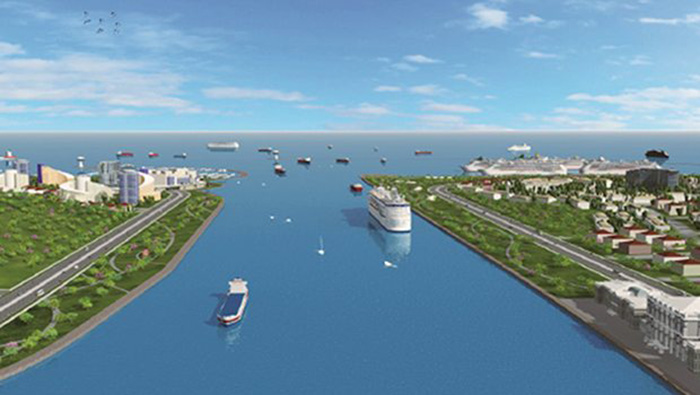 by Ahmet Topal Mar 04, 2015 12:00 am
Preparations will begin soon for the Canal Istanbul project, which was announced during the prime ministry of current President Recep Tayyip Erdoğan, and commonly referred to as the "crazy project." The government is expended to announce a tender for the project within the next two months and construction will start within the year.

Erdoğan had announced various mega projects during his campaign for the 2011 elections. The Canal Istanbul project, which will connect the Black Sea to the Marmara Sea, attracted the attention of international media and aims to increase Turkey's prestige.

While Erdoğan has underscored since 2011 that the project will be realized, no steps had been taken until today. While the plot and drawings of the canal had been in the works for some time, no details had been announced about the preparations for the canal, which will be 45 kilometers long. The project will be implemented as one of the targets for 2023, and will create revenue by charging vessels crossing the canal by tonnage.

According to the finalized details of the project, a mega city will be built on the two shores of Canal Istanbul with around 500,000 residences. The mega city's buildings will have a maximum of six floors each, and six bridges will be built over the canal. The approximate cost for the entire project is estimated at $20 billion.

The construction work for the project will start in 2023 and the contractors will be chosen in June. Canal Istanbul is a self-financing project and will operate with a build-operate-transfer model. All details of the project will be revealed when the tender is announced, and the construction sector is expected to be stirred with this announcement.
Last Update: Mar 04, 2015 4:45 pm
RELATED TOPICS