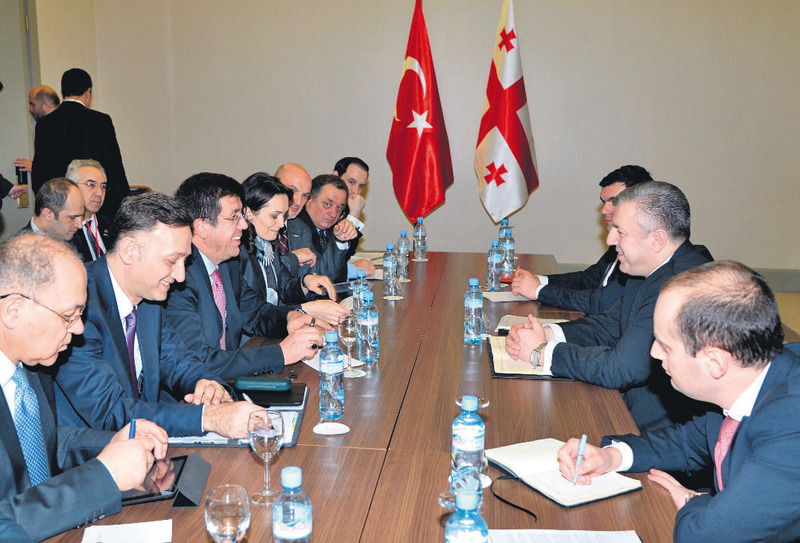 Ministers and businessmen from Turkey, Georgia and Azerbaijan gathered in Batumi to boost bilateral trade and investments while debating building a new Silk Road

Economy Minister Nihat Zeybekci has said on Friday that the Silk Road still has great potential and all the connections on the Turkish side of the road are almost completed with the Marmaray and that other countries should strive to complete all the related work.

Zeybekci attended the fourth Georgia-Turkey-Azerbaijan Business Forum organized in Batumi, Georgia. Along with Zeybekci, Georgian Deputy Prime Minister and Minister of Economy and Sustainable Development George Kvirikashvili and the Azerbaijani Minister of Economy and Industry Shahin Mustafayev, Chairman of Industry and Commerce in Trabzon M. Suat Hacısalihoğlu and the General Secretary of the East Black Sea Region Development Agency Çetin Oktay Kaldırım participated at the forum.

The forum, to which more than 350 businessmen from three countries attended, was opened by the Georgian President Irakli Garibashvili. He said that economic relations between the three countries have been improving lately and will further develop in the near future. "As the government, we are aiming to improve this environment of trust and increase investments in Georgia in order for it to become one of the major players in the region," Garibashvili said, and added that currently there is an environment of trust that is transparent and fair and will help protect the investments.

Zeybekci said that the Silk Road will revive within the next three to five years as transportation over the Black Sea and Caspian Sea regions increase, ports become busier, Ro-Ro voyages increase along with an increase in transmission of energy and natural gas. He added that after the Kars-Tbilisi-Baku railroad is completed, the countries will discuss problems in transportations to undertake the construction of other roads. "Currently, our cooperation has exceeded $7 billion and it has a potential to reach $20 billion, which is the true potential," Zeybekci said.

Zeybekci also underlined that due to close proximity between the three countries, they all produce similar products and that they need to take advantage of this trade potential. "We need to use this potential to our advantage. We have to act as one producer, one sector, one provider to the whole world," Zeybekci said.

Highlighting the importance of cooperation, especially in energy and transportation, between the three countries, he said that cooperation should not be just limited to the region, but the countries should also consider their potential to reach out together to markets further afield.

Mustafayev underlined the importance of Garibashivili's attendance to the forum in person and said that all countries are highly determined to increase cooperation. He said that along with the construction of the Kars-Tbilisi-Baku railroad, the Southern Gas corridor project will be implemented soon. "These are major projects that are crucial for covering the energy requirements of European countries," Mustafayev said.

Hacısalihoğlu underlined the importance of the forum and said that the success of Turkish small- and medium-sized enterprises in Azerbaijan and Georgia will be increasing in the near future. He said that Turkish investments in Azerbaijan are at $5 billion, and since Georgia is currently offering low-interest loans to Turkish investors, it increases the potential of co-investments in the region.