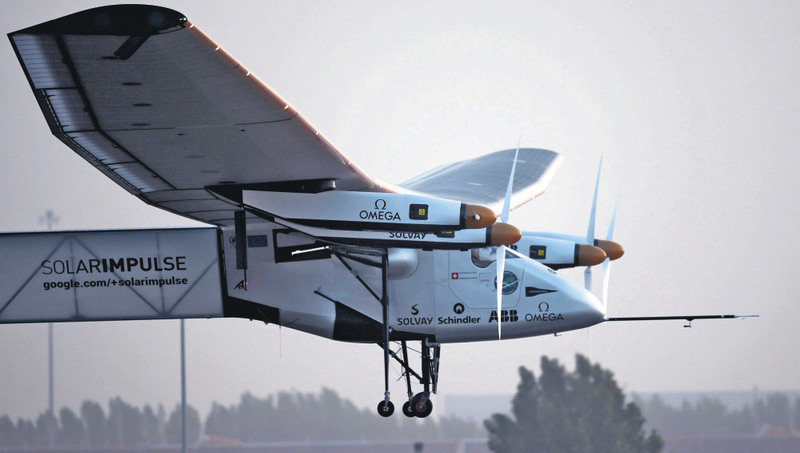 by French Press Agency - AFP
Mar 09, 2015 12:00 am
A solar-powered plane set off from Abu Dhabi yesterday on a bid to make the first round-the-world tour, a marathon journey that will test its pilots' endurance to the limit. "The adventure has started," Solar Impulse chairman Bertrand Piccard said emotionally, after pilot Andre Borschberg took off from Abu Dhabi's Al-Bateen airport on the historic circumnavigation aimed at promoting green energy. The wingspan of the one-seater plane, known as the Si2, is slightly bigger than that of a jumbo jet, but its weight is around that of a family car. From Muscat, it will make 12 stops on an epic journey spread over five months, with a total flight time of around 25 days. It will cross the Arabian Sea to India before heading on to Myanmar, China, Hawaii and New York. Landings are also earmarked for the midwestern United States and either southern Europe or North Africa, depending on weather conditions. The longest single leg will see a lone pilot fly non-stop for five days and nights across the Pacific Ocean between Nanjing, China and Hawaii, a distance of 8,500 kilometers. Borschberg and Piccard will alternate stints flying the plane, which can hold only one person, with the aircraft able to fly on autopilot during rest breaks. All this will happen without burning a drop of fuel. The pilots will be linked to a control centre in Monaco where 65 weathermen, air traffic controllers and engineers will be stationed. A team of 65 ground staff will travel with the two pilots. Should a problem occur while sleeping, the support staff can wake up the pilot. The plane is powered by more than 17,000 solar cells built into wings that, at 72 meters, are longer than a jumbo and approaching those of an Airbus A380 superjumbo. Thanks to an innovative design, the lightweight carbon fiber aircraft weighs only 2.3 tons, about the same as a family 4X4 and less than one percent of the weight of the A380.
Last Update: Mar 09, 2015 11:06 pm