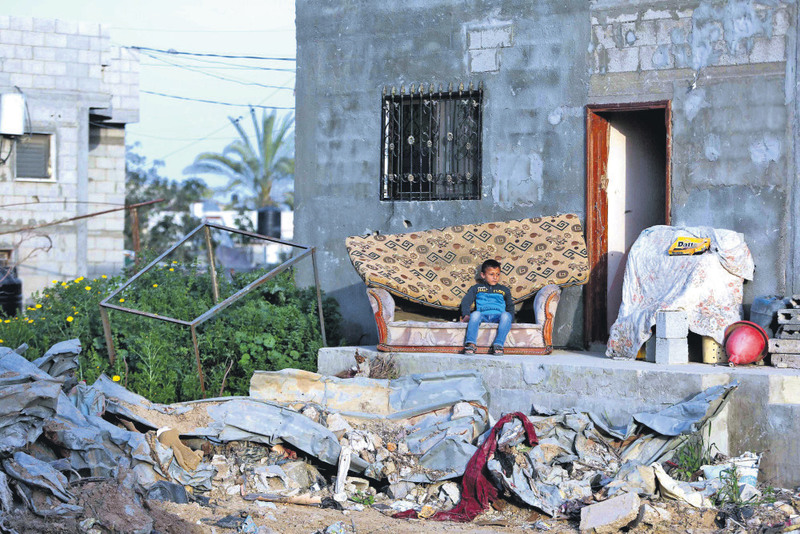 A Palestinian boy sits on a sofa outside his family's house that witnesses said was damaged by Israeli shelling during a 50-day war last summer in Khan Younis in the southern Gaza Strip.
by Anadolu Agency Mar 15, 2015 12:00 am

Around 50 countries pledged a total of $5.4 billion to the Palestinian government in 2014. The Qatari Committee to Rebuild the Gaza Strip is trying to convince the international community to fulfill its pledges

Mohammed al-Amadi, the head of the Qatari Committee to Rebuild the Gaza Strip, called on the international community to fulfill the financial pledges it made for the Gaza Strip during a conference in Egyptian capital Cairo late last year. In an exclusive interview with the Anadolu Agency (AA), al-Amadi said that many countries had repeatedly pledged to provide aid for the reconstruction of the Palestinian territory, but that they had yet to fulfill their promises.Al-Amadi, currently on a visit to Gaza, said that Qatar was working "tirelessly" to encourage these countries to shoulder their responsibility toward the embattled enclave.

"They [the countries which pledged support] did not honor their pledges in the past, and we're currently trying to convince the international community to fulfill these pledges," Al-Amadi said.

"Early signs have been positive in this regard: Washington has earmarked $10 million for rebuilding Gaza, while Saudi Arabia, Kuwait and several European countries are going to provide assistance," he added.

The Qatari official revealed that Norway was working on establishing its own bureau in the Gaza Strip akin to the Qatari office for rebuilding Gaza. At a donor conference in Cairo in October of 2014, around 50 countries pledged a total of $5.4 billion to the Palestinian government, half of which was earmarked for the reconstruction of the devastated Gaza Strip. Al-Amadi said his country honored every promise it had made to the strip. "This is not charity to Gaza, but a patriotic and religious duty," al-Amadi said. "Whatever we've provided remains little," he added, noting that much more was needed to be done in the Palestinian territory. Al-Amadi went on to note that he entered Gaza through the Israeli-controlled Erez crossing due to the closure of the Rafah crossing between Gaza and Egypt.

"The Rafah crossing is closed and the road from Cairo to Rafah is a rough one," al-Amadi said. He added that he wanted to enter the Gaza Strip through the Rafah crossing, but that Egyptian authorities had told him that the security situation in Egypt's Sinai Peninsula was not suitable. "Therefore, we had coordinated with the Palestinian Authority to enter through Erez," he said.

When he arrived in Gaza on Monday, al-Amadi announced the launch of Qatari projects to rebuild buildings and facilities destroyed in the coastal enclave during Israel's latest offensive on it in July and August of 2014. He said Qatar would build 1,000 residential units, noting that the $1 billion donation Qatar pledged at the Cairo donor conference would be used for this purpose. Al-Amadi said the continued influx of building materials into Gaza would trigger a major economic revival that would help tens of thousands of Palestinians find jobs.

The Qatari official added that his country coordinated with Turkey to provide aid to the Gaza Strip. The reconstruction of the coastal enclave-which has suffered massive material damage as a result of three major conflicts in the past seven years-currently remains on hold, as funds promised last year by international donors have yet to materialize.

An Israeli blockade on Gaza, in effect since 2007, has also impeded the entry of building materials into the territory, despite a cease-fire signed last summer with Palestinian factions that included an Israeli commitment to open its borders with Gaza.

During Israel's seven-week onslaught in July and August of last year, 15,671 housing units across the strip were damaged, including 2,276 that were completely destroyed, according to official Palestinian figures.