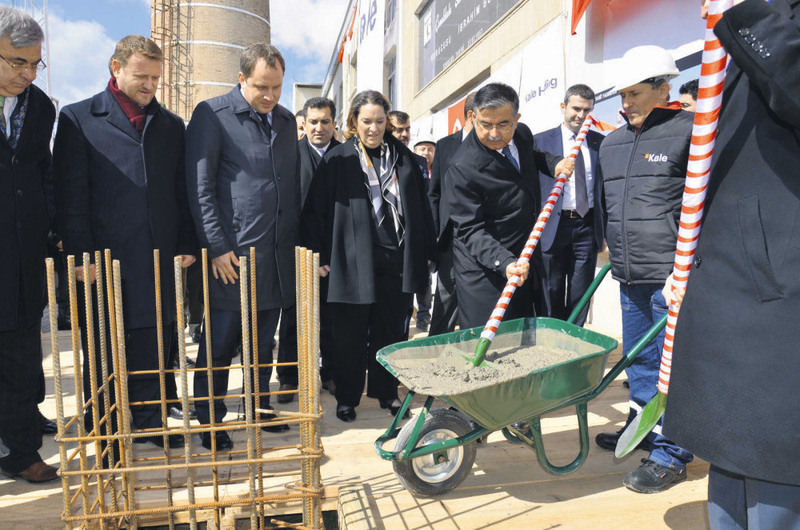 by İbrahım Acar Mar 20, 2015 12:00 am
"For Turkey to make a leap, we have to enter into the Çanakkale spirit," said Zeynep Bodur Okyay, CEO of the Kale Group, which has invested TL 100 million (38.52 million) in Çanakkale, during the inauguration ceremony of a new granite factory.

Kale Group has made an interactive documentary about the strategic battle for the 100th anniversary of the Gallipoli victory as a sign of loyalty to its birthplace, Çanakkale. In place of the existing factory, which started production 58 years ago under İbrahim Bodur, a new granite factory will be established. Speaking at the inauguration ceremony, attended by National Defense Minister İsmet Yılmaz, Okyay announced that they were pleased to build the new factory in the same place as the first factory but with totally new technology. "We are standing in the same place that shaped our liberty, but now we are here to shape our future with economic victories," Okyay said. She stressed that 58 years ago, the factory produced and cooked ceramic tiles measuring 15 cm x 15 cm in a week, but now tiles as long as 1 x 3 meters can be produced in half an hour.

She further emphasized that the group will be investing in the aviation and defense industries, and that they have labor involved in projects such as the first domestically-produced drone along with the Turbojet Motor Project. "We are producing motor parts for F-35 planes in the aircraft motor production factory we established with Pratt & Whitney. While Turkey's export price for a kilogram is $1.60, the parts produced at this factory are exported on average for $177. We are spending over 2.2 percent of our turnover on R&D this year. We are planning to make investments of TL 420 million in the next five years and increase our turnover to TL 3 billion," Okyay added. She also said that they seek to establish an orchard in Çanakkale.

The interactive documentary titled the "Sons of Gallipoli" depicts the Battle of Gallipoli that took place 100 years ago from the soldiers' mothers' point of view, and can be watched as of today online at: www.canakkaleninevlatlari.com and www.sonsofgallipoli.com.

The documentary is an 11-episode film archive consisting of 300 documents and 38 interactive maps of the battlefield. One Turkish and one ANZAC mother try to feel what the mothers who sent their children to the battle felt and experienced 100 years ago.
Last Update: Mar 20, 2015 9:03 pm
RELATED TOPICS