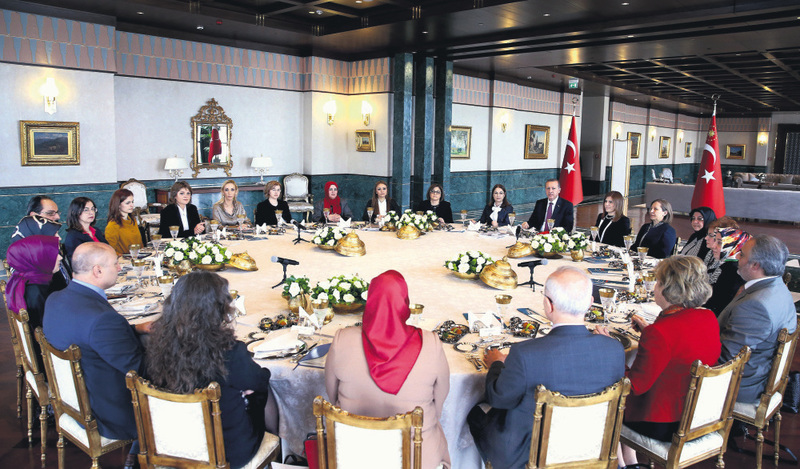 by Daily Sabah Mar 25, 2015 12:00 am
Dozens of female representatives from various institutions, including Parliament, nongovernmental organizations, media outlets and think tanks were present at the Presidential luncheon hosted by President Recep Tayyip Erdoğan on Tuesday. The rise of violence against women and the measures taken to combat the problematic issue were discussed during the meeting. The prevalence of domestic, physical and sexual violence targeting women despite measures has been raising concern in Turkey with authorities seeking to curb the disturbing trend. The government is looking into ways to implement more effective judicial measures and ways to raise awareness to the issue among the public.

Public reaction to the violence was mostly confined to protests by women's nongovernmental organizations until last week. The brutal murder of Özgecan Aslan, a 20-year-old university student, apparently changed this as nationwide protests following the incident have shown. Aslan was stabbed, had her hands cut off and then her body was set on fire, allegedly when she resisted a rape attempt in the southern city of Mersin. Three men, a minibus driver who confessed to killing the university student, his friend and his father, who helped the man dispose of the body, were arrested.

Family and Social Policies Minister Ayşenur İslam said that Turkey already has laws in place for severe punishment of perpetrators of such crimes, but pointed to the courts for the executing of the laws. Critics complain that culprits get away with lenient sentences due to the "good conduct" clause that enables a reduction in prison terms for defendants with no record of past conviction who are "respectful." İslam says Özgecan Aslan's murder may be a turning point in Turkey's struggle against violence. She said that an upsurge of violence in the last decades threatened the world. "We live in a world where levels of violence have significantly increased. For instance, a survey conducted in 28 European Union member countries showed one in every three women suffered from physical and sexual violence starting from the age of 15," she says. However, only a small percentage of women suffering from such violence report it to police. "These cases are common even in the most developed countries. Yet, this is no excuse for us, to consider that it is a challenge we cannot overcome," İslam said. She underlines that level of development and education does not have an effect in decreasing the cases of violence.
Last Update: Mar 25, 2015 2:12 am
RELATED TOPICS