After a year at war, Ukraine at financial breaking point 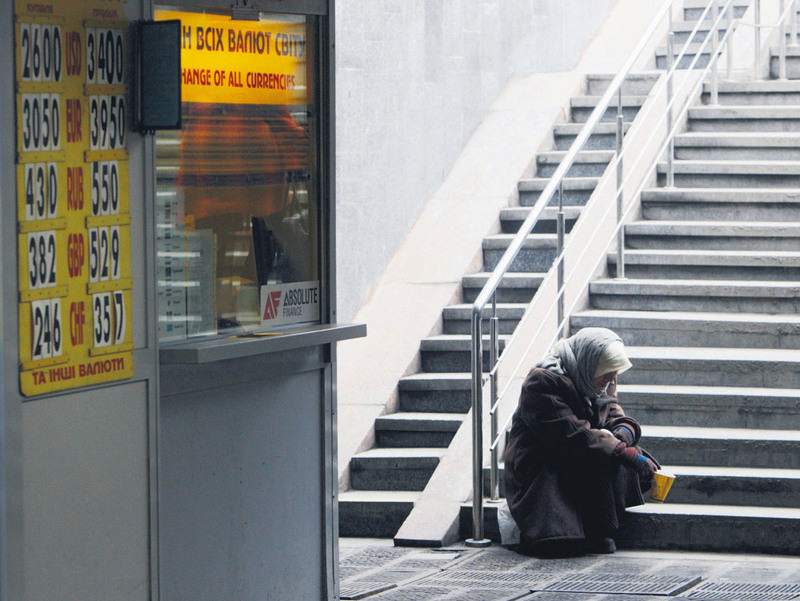 A woman sits next a currency exchange office in Kiev. A separatist war in the east of the country has made it difficult to stabilise an economy on the verge of bankruptcy.
by Apr 06, 2015 12:00 am

Bruised and battered after a year of armed conflict, Ukraine has been crippled by a combination of monetary, budgetary, industrial, banking and energy crises that could make it dependent on outside help for decades

Ukraine has suffered a series of shocks that has obliterated its fragile economy. Its vital heavy industry, in the east, has been completely hamstrung, with production plunging by a fifth - not helped by a sharp decline in steel prices. In addition, with foreign investors fleeing the uncertainty, the value of the local currency, the hryvnia, has fallen by around 50 percent since the beginning of the year. "Like many emerging markets, this has a direct effect on households, businesses and public finances, because both private and public debt is denominated in foreign currency," said Julien Marcilly, chief economist at insurance firm Coface. Gross domestic product contracted 6.8 percent last year, according to official statistics and the central bank is bracing for a decline of as much as 7.5 percent in 2015. Ukraine is also suffering a debt crisis, with its proportion of public debt to gross domestic product (GDP) expected to spiral to 94 percent this year, according to the International Monetary Fund - from a healthy 40 percent in 2013.

"There is a banking crisis, a monetary crisis and an economic crisis that translated into a strong contraction of GDP last year. This year, there will probably also be an energy crisis," said Francis Malige, Managing Director for Eastern Europe and the Caucasus at the European Bank for Reconstruction and Development. The international community, desperate to avoid a collapse in the Ukrainian economy that could be a propaganda coup for Russia, has rushed to its aid. In April 2014, the IMF sketched out a bailout plan worth some $17.5 billion to come in a series of tranches - $5 billion of which has already been paid out. This is part of a package of $40 billion pledged by the international community to help Ukraine back on its feet. The European Union has offered Ukraine about 1.6 billion euros ($2 billion) in short-term assistance and put together a wider package worth about 11 billion euros. Ukraine has encountered huge difficulties in borrowing on the open market, raising only small sums over short periods of time. Possible lenders are scared off by the potential for default - which the Moody's ratings agency says is near 100 percent.

However, others see it differently - billionaire investor George Soros has said he is willing to plough one billion dollars into the country. One thing that particularly irks investors is the perceived level of corruption in Ukraine. The authorities in Kiev say they are trying to stamp out corruption and have fired a billionaire governor and arrested some high-level officials.

But Tatiana Jean, from the Paris-based IFRI think tank, said part of that was "play-acting". If authorities were serious about clamping down on corruption, they could start with breaking the monopoly of state gas firm Naftogaz, she says.

Malige, from the EBRD - the main investor in the country - said another priority was to clean up the financial system. "There are too many banks in Ukraine working on a closed system. They are in the hands of a few powerful people and they tend to finance the companies held by those same people," he said. Nonetheless, he pointed out some of Ukraine's attractions: fertile agricultural land, "ultra-competitive" workforce and "the most reform-minded government since independence."

In a recent trip to Paris to drum up investment support, Economy Minister Aivaras Abromavicius played on the country's economic liberalism, vowing a series of privatisations and cuts in the public sector. "I agree with [former U.S. president Ronald Reagan], who said: 'The most terrifying words in the English language are: I'm from the government and I'm here to help'."
Last Update: Apr 06, 2015 2:17 am
RELATED TOPICS