Term limits in DEİK needed but also pose a challenge 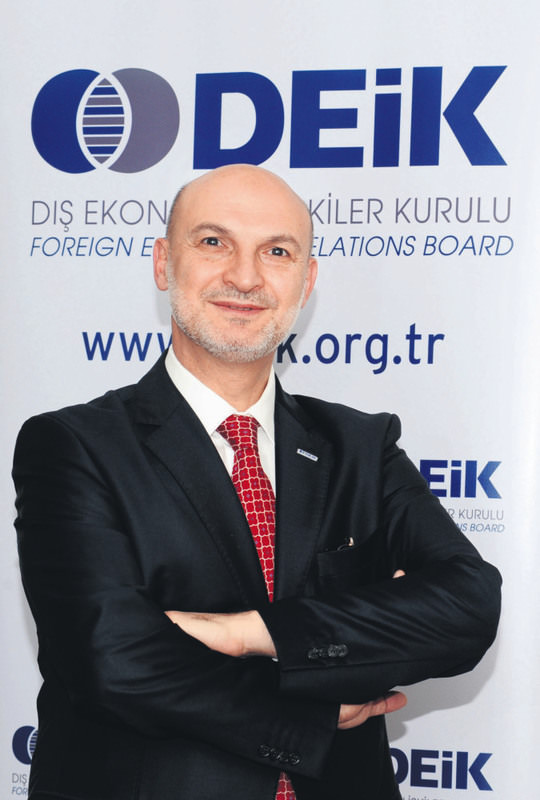 The Turkish business community's foreign relations coordinator body is getting prepared to change half of the chairmen of its business councils, which will bring dynamism to the institution along with a great challenge

The Foreign Economic Relations Board (DEİK) is the face of Turkey's business community abroad. As the authorized representative, the board organizes business delegations all over the world and hosts foreign businessmen in Turkey. Along with the busy schedule, the institution is now preparing for a total change.

Turkey's ruling Justice and Development Party (AK Party) established a regulation for the party in which a party member cannot be elected as a deputy for the fourth time after fulfilling three consecutive terms. For example, Deputy Prime Minister Bülent Arınç will not be elected in the next general elections scheduled to be held on June 7 since he is completing his third term.

DEİK had been established as a board to work for the Union of Chambers and Commodity Exchanges of Turkey (TOBB), and the board addresses the foreign relations of the chamber. However, this was changed by the Economy Ministry and DEİK has acted like a legal entity since September. That was not the only change, however, and the board now has to change the chairmen of the business councils after three consecutive terms. This will bring dynamism to the institution as the president of DEİK, Ömer Cihad Vardan, has described, while it will also be challenging.

In a special interview with Vardan, Daily Sabah discussed the new DEİK as the face of Turkey's business community.

Daily Sabah: Can you provide some information about DEİK? When was it established and for what purpose?

Ömer Cihad Vardan: DEİK was established in 1986 by the request of then Prime Minister Turgut Özal to lead the foreign economic relations of the Turkish private sector in terms of foreign trade, international investment and services, international construction activities and logistics, exploring inward and outward investment opportunities, increasing the export volume of Turkish business and coordinating similar business development activities.

DS: Who are the managers? How do the managing structures operate?

ÖCV: DEİK has become a more inclusive institution since September 2014. The board has more than 100 founder institutions. However, five of them are the most active. With the last regulation in September, the chairmen of those five groups have been assigned as the vice presidents of DEİK. Those groups are the leading business communities of Turkey: The TOBB, Turkish Exporters Assembly (TİM), Turkish Industry and Business Association (TÜSİAD), Independent Industrialists' and Businessmen's Association (MÜSİAD) and Turkish Contractors Association. In the general assembly, the members of DEİK vote for the board of directors and the Economy Minister assigns the president from that board. DEİK has 900 individual members, including the representatives, and works with more than 2,500 people.

DS: What are the main activities of DEİK?

DEİK organizes any activities concerning the business world. The board organizes business delegations abroad and hosts delegations in Turkey. As the authorized representative, we organize the accompanying delegations for the Turkish president, prime minister and economy minister during their official visits to different countries. We organize three activities on average at different locations. Basically, we arrange B2B matches for Turkish businessmen along with business forums, CEO forums and panels.

The main objective is to contribute to accomplishing the 2023 goals for Turkey. We are working to increase our trade volume with different countries to reach the $500 billion export target in 2023. These goals can be achieved only if the businessmen of this country believe they are achievable and work for them. This suggests the need for professional coordination, which DEİK has become active in providing. Turkey has been renewed. Istanbul, Ankara, Bursa and İzmir were the only cities in Turkey exporting products. That has now changed and our companies have progressed.

DS: What are the business councils and their functions?

We have country- and regional-based business councils. The councils have their own management teams consisting of businessmen who trade with that county. The governments of two countries officially recognize the council and there are co-chairs; one is a Turkish businessmen and the other is a businessman from that country. For example, İsmet Güral is the chairman of the Turkish chapter of the Turkey-Hungary Business Council and Ferenc Miklossy is Güral's counterpart. We have 121 business councils in total, 114 of them are country-based and five of them are sector-based, including energy, education economy, health tourism, international technical consultancy and logistics. These sectors have been selected in parallel with the development of the economy. Two business councils have special aims: The international investments council and the World Turkish Business Council (DTİK). DTİK was established to gather Turkish businessmen living in different countries like a networking platform and give them the opportunity to do business together. This platform involves academics as well and works for the Turkish diaspora.

DS: What are the short-term plans of DEİK?

The number of Turkish embassies in Africa has increased to 39 from 12. DEİK has 22 business councils in African countries and we are currently working to reach 39. Three of them will be launched soon.

DS: What do you think about the three-term rule? Are there any disadvantages to this change?

One term lasts two years, which means a chairman of a business council can stay in that position for six years. After that, they can take different responsibilities in DEİK. We have a high advisory board in which everyone who works hard for DEİK can participate. Half of the chairmen of the business councils will change in December, which will usher in 60 new chairmen. It is a challenge for us. However, for Turkey to develop, it needs to constantly improve institutions. We want our activities to be based on the systems, not on individuals. Chairmen should not be concerned about their benefits; of course, they are businessmen and will work for their trade, but the main aim is to contribute to Turkey. So, this change will bring dynamism to DEİK.
Last Update: Apr 24, 2015 10:50 am
RELATED TOPICS