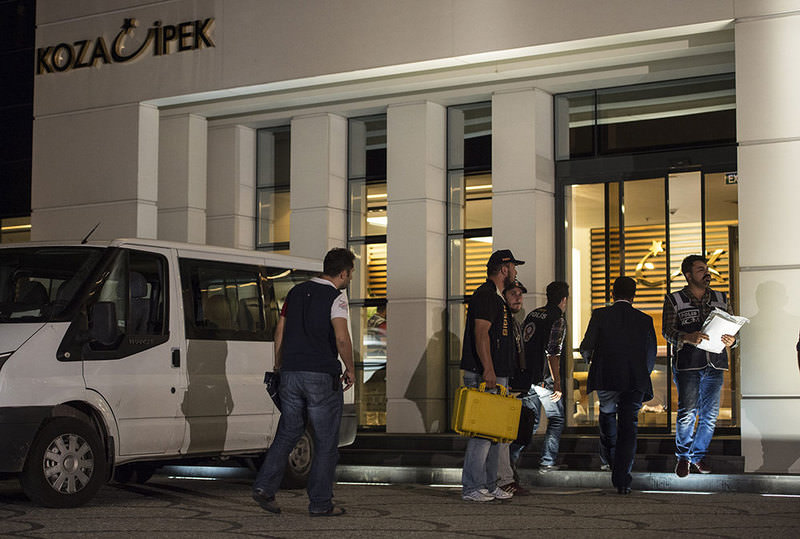 Organized crime police searched the premises of Koza İpek Holding in Ankara for the second time after claims that $7.04 billion were illegally transferred to the holding’s bank accounts in Bahrain, Malta and Cyprus along with Kaynak Holding in Istanbul

Police have been carrying out a search over the last two days at Koza İpek Holding in Ankara and Kaynak Holding in Istanbul, both accused of providing financial support for a terrorist organization.
Security sources said that officers from the Organized Crimes Directorate are searching the Koza İpek offices in Ankara, a week after they carried out searches in the conglomerate's 23 companies.

Police sources said the holding is suspected of providing financial support and distributing propaganda for what government officials call the Gülenist Terror Organization (FETÖ), which is led by U.S.-based Fethullah Gülen who lives in self-imposed exile in rural Pennsylvania. The Ankara Public Prosecutor's Office ordered the search on Wednesday after it requested new documents from the holding's authorities. Sources say there are no new arrest warrants.

On Sept. 1, six people were arrested and an arrest warrant was issued for Akın İpek, the group's chairman, who sources said was thought to be in the U.K. During searches, police confiscated documents and computers.

Koza İpek was founded in 1948 by Akın İpek's father, Ali, as a printing company. Today it has interests in media, energy, construction and mining. Among its media holdings are the Bugün and Kanaltürk TV stations as well as dailies Bugün and Millet.
Separately, Istanbul police are conducting searches at the Kaynak Holding for the second day in a row. Kaynak owns 23 companies with interests including media, education, tourism and logistics. Employees were not allowed to enter the offices on Wednesday.

Security sources said the search operation, which was confirmed Tuesday by the company on its Twitter account, was in relation to allegations of providing financial support to and disseminating propaganda for the Gülenist Terrorist Organization as well as money laundering. Kaynak was the subject of a tax investigation last year. There were no reports on arrests or confiscations as a result of Tuesday's raids.

According to Kaynak's website, the conglomerate was established in 1979 as a publishing company and now spans 16 sectors. It employs more than 8,000 staff and trades in more than 100 countries.

Inspectors found that the price of gold extracted from mines were shown to be 10 times higher than their real value by the holding's gold group while aid money was sent abroad. They said that if Koza İpek Holding has a connection with members of terror organizations its assets can be confiscated in the name of national security.

The Gülen Terror Organization is accused of conspiring against the state, wiretapping thousands of people including government officials and encrypting phones. The organization has been labeled a threat against the country's national security.

Government officials have continuously expressed their determination to continue to lawfully fight against the Gülen Terror Organization, which has been accused of trying to topple the democratically elected government through its operatives in the judiciary and the police. Moreover, the organization has been defined along the lines of "civilian elements attempting to take over the state by unlawfully organizing within state institutions" in the Red Book, a legal document that contains the country's security threats, since January 2015.